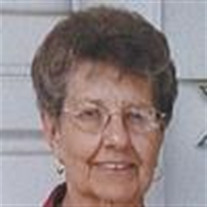 Inez Schons, 81, of Morgan died Thursday, May 31, 2012 at Sleepy Eye Medical Center. Mass of Christian Burial will be held at 10:30 a.m. on Saturday, June 2, 2012 from St. Michael’s Catholic Church in Morgan. Burial will be held in St. Joseph’s Catholic Cemetery, Clements. Visitation will be held on Friday, June 1, 2012, from 5 until 7 p.m. at St. Michael’s Catholic Church, with a prayer service at 6:30 p.m. Visitation will continue on Saturday at the church for one hour prior to services. Arrangements are with Nelson-Martin Funeral Service of Morgan. E-mail condolences may be sent via www.nelsonmartinfuneralservice.com. Inez Ione Schons, the daughter of John and Gertrude (Wefers) Zamzow, was born May 14, 1931 in Three Lakes Township, Redwood County. She grew up in Three Lakes Township and received her formal education in the local schools. Inez was baptized and confirmed at Bethlehem Lutheran Church in Clements. On June 12, 1951, Inez married Linus Schons at St. Joseph’s Catholic Church in Clements and the couple made their home on a farm near Clements. Following their retirement the couple moved to Springfield. They entered Gil-Mor Manor in Morgan in January of this year. Inez worked side-by-side with her husband on the farm. She was also employed as a chicken sexer for many years at the Morgan Hatchery and Star Hatchery in Springfield. Inez was a member of St. Joseph’s Catholic Church in Clements and St. Raphael’s Catholic Church in Springfield as well as the Catholic Aid and CCW. She enjoyed gardening, traveling with Linus, dancing, and playing cards. Time spent with family was precious to Inez; she enjoyed going out to eat with family and friends alike. Inez is survived by her husband Linus of Morgan; and daughters Lynn (Steve) Dolan of Iowa City, Iowa, and Lori (Eugene) Zempel of Morgan. Also surviving are her grandchildren Jennifer Schmidt of Morgan; Jason (Carrie) LeGare of Bettendorf, Iowa and their children Gabby, Ethan, and Owen; and Jeremy (Heather) LeGare of Louisville, Kentucky and their daughter Elise. Further surviving are her siblings Fern Kitzman of Oklahoma City, Oklahoma, Jim Zamzow of Sleepy Eye , Shirley Smetak of Redwood Falls, and Denver Zamzow of Morgan; and sister-in-law Dorothy Zamzow of Morgan. She was preceded in death by her parents; and brothers Delta, Marlin, Lester, and John. Blessed be her memory.

The family of Inez Ione Schons created this Life Tributes page to make it easy to share your memories.

Send flowers to the Schons family.