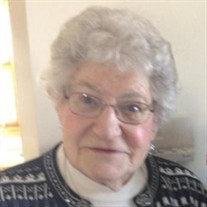 Ila L. Stramel, 99, of Redwood Falls died Monday, December 20, 2021 at Minnesota Masonic Home in Bloomington. Funeral services will be held at 1:00 p.m. on Tuesday December 28, 2021 at First United Methodist Church in Redwood Falls with burial to follow in Redwood Falls Cemetery. Visitation will be held from 11:30 until 1:00 p.m. on Tuesday, December 28, 2021 at First United Methodist Church in Redwood Falls. The funeral service on Tuesday will be livestreamed on YouTube, https://www.youtube.com/channel/UCDng28J92FHBCvAUIoq5eBQ Arrangements are with Nelson-Hillestad Funeral and Cremation Service of Redwood Falls. E-mail condolences may be sent via www.nelson-hillestad.com. Ila, the daughter of Henry and Ila Maude (Briggs) Best, was born February 18, 1922 in Omaha, Nebraska. She was an affiliated member of the Methodist Church in Omaha, Nebraska, where she was baptized in 1922. Ila graduated from McCook High School in 1940 and went on to further her education at McCook Jr. College, where she graduated in 1942. Ila married Clement Stramel Jr. in 1947 in McCook, Nebraska. Together, they moved to St. Paul, Minnesota in 1947, living there for two years, and then moving to the Morgan, and later Redwood Falls. Ila worked at the Redwood Falls Public School as the secretary, for 22 years, retiring in 1988. In 2014, Ila moved to Minnesota Masonic Home in Bloomington. She loved to travel and was a strong-willed lady that loved living life to the fullest. She is survived by her six children Linda (Jeff Borneman) Waterman of Phoenix, AZ, Carol Hagensick of Madison, WI, David (Cheryl) Stramel of Bloomington, MN, Janet Krueger of Portland, OR, James Stramel of Bloomington, MN, Paula Stramel of Bloomington MN; and is further survived by eight grandchildren, and one great grandchild. She was preceded in death by her parents, Henry and Ila Best; her husband, Clement Jr.; sister, Lillian Dunbar; and her brother, Ellwood Best. In leau of flowers, the family requests you make a donation to your favorite charity. In loving memory.

The family of Ila Stramel created this Life Tributes page to make it easy to share your memories.