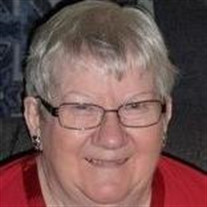 Helen Lemcke, 82, of Morgan died Saturday, May 14, 2016 at Sleepy Eye Hospital. Memorial Services will be held at 10:30 a.m. on Thursday, May 19, 2016 from St. John Lutheran Church in Morgan with inurnment to follow in the church cemetery. Visitation will be held on Wednesday, May 18, 2016, from 4 until 8 p.m., at Nelson-Hillestad Funeral Home in Morgan and will continue on Thursday at the church from 9:30 until 10:30 a.m. Arrangements are with Nelson-Hillestad Funeral and Cremation Service of Morgan. E-mail condolences may be sent via www.nelson-hillestad.com. Helen Loraine Lemcke, the daughter of Harold and Laura (Meyer) Zimmermann, was born January 5, 1934 in Morgan. She grew up in Morgan and graduated from Morgan High School in 1952. As a teenager, Helen spent many hours babysitting and later worked at the Morgan Bakery. On November 2, 1955, Helen married Arden Lemcke at St. John Lutheran Church in Morgan and they made their home in Morgan. Helen belonged to the New Horizons Extension group and enjoyed babysitting, sewing, playing cards, and visiting. She was a member of St. John Lutheran Church, its WELCA and Bible study group. As a teenager, Helen was active in the church’s Luther League. Helen did seasonal work at DelMonte before becoming employed as a medical assistant at Gil-Mor Manor in 1971. She retired from Gil-Mor Manor in 2000, after 29 years of employment there. Helen is survived by her children Cheryl (Brian) Garrels of Emmetsburg, Iowa, and Sue Lemcke, Pam (Michael) Kalvig, Teresa Lemcke, and Randy (Nicole) Lemcke all of Morgan; 11 grandchildren; and four-and-a-half great-grandchildren. Also surviving are her sisters Ruth Steffl and Dorothy Thulien, and brother Raymond Zimmermann. Helen was preceded in death by her husband Arden on January 20, 2010; her mother Laura Zimmermann in September 1989; father Harold Zimmermann in July 1965; brothers Donald Zimmermann and Delfred Zimmermann; and sister Lyla Schottenbauer. Blessed be her memory.

Helen Lemcke, 82, of Morgan died Saturday, May 14, 2016 at Sleepy Eye Hospital. Memorial Services will be held at 10:30 a.m. on Thursday, May 19, 2016 from St. John Lutheran Church in Morgan with inurnment to follow in the church cemetery. Visitation... View Obituary & Service Information

The family of Helen Lemcke created this Life Tributes page to make it easy to share your memories.

Send flowers to the Lemcke family.