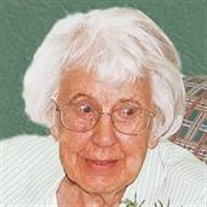 Helen Goodyear, 91, of Redwood Falls died Wednesday, March 9, 2011 at Gil-Mor Manor in Morgan. Services will be held at 10:30 a.m. on Tuesday, March 15, 2011 from First Presbyterian Church in Redwood Falls with Rev. Scott Prouty officiating. Burial will follow in the Redwood Falls Cemetery. Visitation will be held on Monday, March 14, 2011, from 4 until 7 p.m., at the Nelson-Martin Funeral Home in Redwood Falls and will continue on Tuesday at the church for one hour prior to services. Arrangements are with Nelson-Martin Funeral Service of Redwood Falls. E-mail condolences may be sent via www.nelsonmartinfuneralservice.com. Helen May Goodyear, the daughter of Alfred and Rosa (Brade) Hansen, was born April 28, 1919 in Garner, Iowa. She was raised in Garner and Nevada, Iowa. Helen was Valedictorian of her Nevada High School graduating class. On February 7, 1942, Helen married Alan Goodyear in Glendale, California. During World War II, the couple resided in San Diego where Helen worked as a nurses’ aid at the Red Cross. Following Alan’s discharge from the military, the couple moved to the Goodyear home farm in rural Redwood Falls. Helen was self-employed as a reupholsterer at Goodyear Upholstery – the business she, Alan and later, their family, owned and operated. Helen retired in 2002. Prior to opening the upholstery business, she worked as secretary at the Redwood Falls Hospital, at Manpower Services, and at various other businesses in Redwood Falls. Helen was a member of First Presbyterian Church in Redwood Falls where she served as church secretary in the 1960s. She was also an elder, a deacon and a member of the church circle. Helen was a member of the local study club and enjoyed painting with oils. Her children enjoyed her homemade bread with home-canned jam and hand-harvested honey. Helen was very family oriented and enjoyed the company of her children, grandchildren and great-grandchildren. She did not do a lot of gardening but enjoyed the flowers that bloomed around her home. Helen and Alan enjoyed spending time at the cabin near Outing, Minnesota. Helen is survived by her children Carole (Loren) Eisenbarth of Morgan, Dale (Lois) Goodyear of Bemidji, Keith Goodyear of Edmond, Oklahoma, and Scott (Joyce) Goodyear of Redwood Falls; eight grandchildren; and four great-grandchildren. She was preceded in death by her husband Alan in August 1994, her brother Maurice, and her sister June. Blessed be her memory.

The family of Helen May Goodyear created this Life Tributes page to make it easy to share your memories.

Send flowers to the Goodyear family.