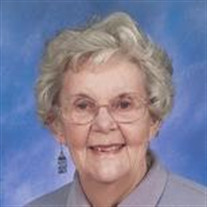 Hazel Dirlam, 91, of Redwood Falls died Monday, September 19, 2011 at her home. Funeral services will be held at 10 a.m. on Friday, September 23, 2011 from First United Methodist Church in Redwood Falls with Rev. Janiece Redman officiating. Burial will follow in the Redwood Falls Cemetery. Visitation will be held at the church on Friday from 9 until 10 a.m. Hazel requested memorials be made to Friends of the Park, Redwood Area Library Foundation, or First United Methodist Church Trust Fund. Arrangements are with Nelson-Martin Funeral Service of Redwood Falls. E-mail condolences may be sent via www.nelsonmartinfuneralservice.com. Hazel Ethel Dirlam, the daughter of Fred and Mary (Kroeger) Heitz, was born February 7, 1920 in Glencoe. She was raised in Glencoe where she received her education. Hazel graduated from Glencoe High School in 1937 and then furthered her education at Minneapolis Secretarial School. She was a typing and shorthand wiz. Hazel worked for Farm Security Office – Rural Electric in Glencoe for a time, then moved to Montevideo to work at the Farm Security Office there. She transferred to the Farm Security Office in Redwood Falls in 1940 and stayed at Lucy Pryor’s until her marriage. On August 5, 1941, Hazel married Maurice “Dick” Dirlam. The couple, along with Dick’s friend Kenneth Wheeler and Hazel’s sister, Esther Heitz, traveled to the Little Brown Church in the Vale, in Iowa, to be married. The Dirlams lived in Redwood Falls until moving to Eugene, Oregon in 1945 where Dick went into business with his brother, Charles. Dick and Hazel returned to Redwood Falls in 1949 where they built and operated Motel 71 – the first motel in Minnesota. Hazel worked as the accountant for Dirlam Realty & Construction and as office secretary at Wood Dale Nursing Home. She worked alongside Dick as they built both Sunwood and Wood Dale nursing homes as well as when Dick served as alderman, on various committees and as Mayor of Redwood Falls. Hazel volunteered with Redwood Area Hospice and the Wood Dale Auxiliary. She was a Girl Scout leader for the 11 girls in her daughters’ troop from kindergarten on. Hazel volunteered with Job’s Daughters and was a member of Eastern Star, 20th Century Club, and the 500 Card Club – all for over 50 years. She also served on the Senior Center Nutrition Committee, and belonged to the local Hobby Club. Hazel enjoyed fishing, snowmobiling, and spending time at their cottage on Diamond Lake. She was a member of First United Methodist Church and the Dorcas Circle; Hazel served as the secretary of the Women’s Society of Christian Service (WSCS) for five years. Hazel is survived by her children Dona Mary Dirlam of Santa Monica, California, Dennis (Eileen) Dirlam of Eden Prairie, Gary (Beth) Dirlam of Baxter, and Debra Dirlam of Redwood Falls; five grandchildren; and two great-grandchildren. She was preceded in death by her husband Maurice Earl “Dick” Dirlam in 1994; her brother; and her four sisters. Blessed be her memory.

The family of Hazel Ethel Dirlam created this Life Tributes page to make it easy to share your memories.

Send flowers to the Dirlam family.