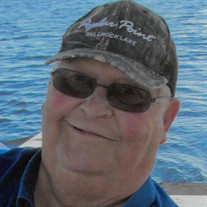 Harvey L. “Lee” Schrank, age 82, of Redwood Falls passed away Saturday, September 11, 2021 at Avera Morningside Heights in Marshall. Funeral Services will be held at 10:30 a.m. on Saturday, September 18, 2021 from Gloria Dei Lutheran Church in Redwood Falls, with burial to follow in the Redwood Falls Cemetery. Visitation will be held Friday, September 17, 2021, from 4 until 7 p.m., at Nelson-Hillestad Funeral Home in Redwood Falls and will continue on Saturday, at the church, from 9:30 until 10:30 a.m. Arrangements are with Nelson-Hillestad Funeral and Cremation Service of Redwood Falls. E-mail condolences may be sent via www.nelson-hillestad.com. Harvey, who well known to friends as “Lee” was born on August 25, 1939 in Parkston, South Dakota. He was the second son born to John Emil Schrank and Edwina Wilamina (Batterman) Schrank. His brother Melvin was 10 years older. Lee grew up on a farm and attended country school. Over the years he had many jobs. At a young age, he worked for his dad’s cousin who was a section boss for the Milwaukee Railroads. He worked on a section replacing rails, tracks, ties, etc. He was extremely proud of his Railroad Social Security card. He worked as a valet for Doc Randall, who owned many grocery stores. In the mid 50’s he flew with him to Cuba to buy sugar; there he discovered his love of flying. He later became a pilot, owning his own plane. Lee went to work for Lindsay Brothers, and worked for them for over 50 years. In 1957, he married Janet Gay Caldwell, the mother of his 5 children: Bradly, Robert, Curtis, Lisa, and Katherine. Sadly, Janet passed away in 1971. On May 26, 1973, he married Sandy (Bye) Piepenburg and adopted her son Richard. Together, they lived in Redwood Falls and added a daughter Susan, making them a family of nine. Lee’s family were members of Gloria Dei Lutheran Church. He became a 32nd Degree Mason and Master of the Antiquity Lodge #91 of Redwood Falls, Minnesota. He was proud to receive his 50 year pin. He was also a Shriner and belonged to the Zuhrah Temple. His proudest moments were sponsoring children to the Shriners Children’s Hospital. Lee enjoyed his lifelong career as a salesman. He enjoyed flying, hunting, fishing, and his coin collection. He was loved by 24 grandchildren, 13 great grandchildren, and 2 great-great grandchildren. His love for them was immeasurable. He is survived by his wife Sandy of 48 years, and 6 children. Brad (Debbie), Bob, Curt (Judy), Lisa, Richard (Sarah), and Susan (Brian). He is survived by his sister-in-law Marge Schrank of Boise, Idaho, and nieces Heidi (Don) Lowman of Boise, Idaho, and Tammy (John) Hammond of Colorado Springs, Colorado. He was preceded in death by his parents, wife Janet, brother Melvin, daughter Katherine and her husband Don Williams, and son-in-law, Haisam Sbini. Blessed be his memory.

The family of Harvey L. "Lee" Schrank created this Life Tributes page to make it easy to share your memories.

Send flowers to the Schrank family.