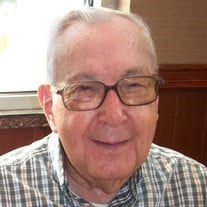 Harry E. Knudsen, 99, of Redwood Falls, passed away on Sunday, Oct. 7, at Wood Dale Nursing Home in Redwood Falls. Funeral services will be held at 11:00 a.m. Friday, October 12, 2018 from the Gloria Dei Lutheran Church in Redwood Falls with visitation one hour prior to the service. Burial with military honors will follow the service at the Bethany Lutheran Church cemetery in rural Morgan. Arrangements are with Nelson-Hillestad Funeral and Cremation Service of Redwood Falls. E-mail condolences may be sent via www.nelson-hillestad.com. Harry Edmund Knudsen was born in Benson, Minn., on Feb. 8, 1919, to John and Karen (Jensen) Knudsen. He grew up in Morgan, Minn., was confirmed at Bethany Lutheran Church and graduated from Morgan High School in 1937. Harry served in the U.S. Army Air Force from November 1942 to February 1946, working as ground crew chief for both B-17 and B-29 Super Fortress airplanes. He attained the rank of staff sergeant and was honorably discharged following World War II. He was united in marriage to Marian Hansen on May 10, 1947, in Minneapolis, and together they raised their family in Redwood Falls. They were married for 49 and a half years and spent their entire married life in Redwood Falls. Marian passed away on Dec. 10, 1996. Harry worked for the Redwood County Highway Department for 35 years, was assistant highway engineer for 20 years and served as Redwood County surveyor for 18 years. Harry was a member of Gloria Dei Lutheran Church where he was a deacon and usher. He also was active in the American Legion and Disabled American Veterans. He was a member of the Redwood Falls American Legion Post for 73 consecutive years, the longest consecutive membership in the local post. Harry also was involved with the Redwood County Historical Society and the Redwood Falls Senior Center for many years, serving on the board and as president of both organizations. Harry enjoyed spending time with his children, grandchildren and great grandchildren, and enjoyed the companionship of his special friend Mary Ann Krueger for the past 15 years. He was very proud of his Danish heritage. He was an avid reader, especially of American history and U.S. presidents, and a fan of the Minnesota Twins, Vikings and football Gophers. In 2013, he donated his large book collection to the Friends of the Redwood Falls Library, the Redwood County Historical Society and the Redwood Valley High School. He was a resident of Wood Dale Nursing Home since March 2011. He passed away at the age of 99 years, 7 months and 29 days. Grateful for having shared his life are his children John (Linda) Knudsen of Houston, Texas, and Karen (Steve) Whitcomb, of Paynesville, Minn.; special friend Mary Ann Krueger, of Redwood Falls; grandchildren Heidi (Mike) Weinand, of Sauk Rapids, Heather (Jim) Anderson, of Sauk Rapids, Andrew (Amy) Knudsen, of Stillwater, and Kari Knudsen, of Chicago; 13 great grandchildren; and his sister Myrtha Christensen, of Strasburg, Va. He was preceded in death by his parents, his wife Marian and granddaughter Holli Whitcomb Rudningen. The family thanks the staff of Wood Dale and the Redwood Area Hospital Hospice Program for their diligent care. Blessed be his memory.

The family of Harry E. Knudsen created this Life Tributes page to make it easy to share your memories.

Send flowers to the Knudsen family.