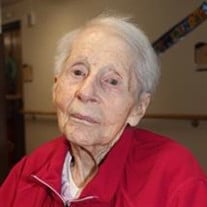 Harriett E. Minsaas, 100, of Redwood Falls died Sunday, May 27, 2018 at Season’s Hospice in Redwood Falls. Memorial services will be held at 10:30 a.m. on Friday, June 1, 2018 from Gloria Dei Lutheran Church in Redwood Falls with inurnment to follow in Olivia Cemetery. Visitation will be held at the church on Friday, June 1, 2018, from 9:30 a.m. until 10:30 a.m. Arrangements are with Nelson-Hillestad Funeral and Cremation Service of Redwood Falls. Condolences may be sent via www.nelson-hillestad.com. Harriett E. Minsaas, the daughter of Harold and Hattie (Phillips) Griffith, was born March 10, 1918, in Olivia, Minnesota. She was graduated from Olivia High School in 1935 and attended Mankato Commercial College through the spring of 1936. Upon completion of courses there, she accepted a position at a Los Gatos, California, private school. A year later, she returned to Minnesota and attended Teachers' Training in Glencoe. She taught in the Renville County Rural School system. Shortly after the outbreak of World War Il, she moved back to the San Francisco Bay area of California and married her first husband, William Friedrich. During this time, she was employed at the United States Forestry Service in their offices on the campus of the University of California at Berkeley. After the war ended, she returned to Minnesota and was employed by International Harvester in Olivia as a small parts bookkeeper. Harriett married her second husband, Eldor R. Minsaas, in 1950, and they made their home in Redwood Falls. During the 1960s, she was a substitute teacher in the Redwood Falls School District, and then taught fourth through sixth grades at the North Redwood School until that facility closed. A member of Gloria Dei Lutheran Church since the late nineteen fifties, she taught release time school, served on the kitchen committee, and was a member of the Martha Circle. Her favorite pastimes included quilting, crocheting, baking, and visiting with friends. Harriett was preceded in death by her parents; her brother, Rowland A. Griffith, Sr., of Olivia; her first husband, William Friedrich; and her second husband, Eldor Minsaas. She is survived by her daughter, Judy Erickson, of Chico, California; her son, Hal Minsaas, of Redwood Falls; nephew and niece Rowland and Nancy Griffith of New London; two grandchildren, seven great grandchildren, and many great and great-great nephews and nieces. Blessed Be Her Memory

The family of Harriett Minsaas created this Life Tributes page to make it easy to share your memories.

Send flowers to the Minsaas family.