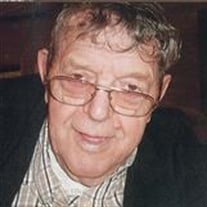 Harold W. Mielke, Sr., 87, of Morgan died Sunday, May 6, 2012 at Gil-Mor Manor in Morgan. Funeral services will be held at 11 a.m. on Thursday, May 10, 2012 from St. John’s Lutheran Church in Morgan with burial in the church cemetery. Visitation will be held on Wednesday, from 4 until 7 p.m. at the Nelson-Martin Funeral Home in Morgan and will continue on Thursday at the church for one hour prior to services.

On April 21, 1946, Harold married Agnes Birkemeyer at St. John’s Lutheran Church in Morgan. The couple settled on the family farm where they farmed and raised their family. Harold was a member of St. John’s Lutheran Church where he served as a deacon, church council president, a mentor for youth receiving confirmation instruction, Sunday school superintendent, an usher, and was a member of Lutheran Brotherhood.

Harold served as the clerk of the Morgan Township Board for 42 years. He also belonged to the Morgan Lions Club and the Friendship Club. Harold enjoyed woodworking and carpentry, dancing, music, traveling, camping, playing cards, and spending time with his family.

He is survived by his children Harold William (Mary) Mielke, Jr. of Pennock, Carol Campbell of Redwood Falls, Nancy (Wm Dale) Klein of Tracy, Patricia (Kenneth) Brooks of Marshall, David (Janice) Mielke of Hutchinson, and Mary Jane (Richard) Soderstrom of Big Lake; 21 grandchildren; 51 great-grandchildren; and his sister Dorothy Rhefield of Marshall. He was preceded in death by his wife Agnes on February 8, 2010; his daughters Becky Ann Mielke, and Anita Walker; his grandson Harold “Trae” W. Mielke III; and his brother Marvin Mielke.

Blessed be his memory.
To order memorial trees or send flowers to the family in memory of Harold William Mielke, please visit our flower store.