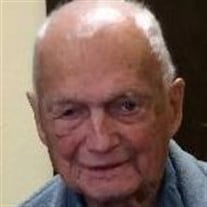 Gordon “Gordy” Pederson, 90, of Redwood Falls died Saturday, September 30, 2017 at Wood Dale Home. Funeral services will be held at 10 a.m. on Wednesday, October 4, 2017 from Gloria Dei Lutheran Church in Redwood Falls. Burial, with military honors, will follow in Redwood Falls Cemetery. Visitation will be held Tuesday, October 3, 2017, from 4 until 7 p.m., at Nelson-Hillestad Funeral Home in Redwood Falls and will continue on Wednesday, from 9 until 10 a.m., at the church. Arrangements are with Nelson-Hillestad Funeral and Cremation Service of Redwood Falls. E-mail condolences may be sent via www.nelson-hillestad.com. Gordon Alvin Pederson, the son of Iver and Lena (Johnson) Pederson, was born August 30, 1927 on the family farm near Walnut Grove. He grew up on the farm and received his formal education in Walnut Grove Public School. Gordy’s parents died when he was 11 years old and he shouldered much of the responsibility of running the farm and caring for his siblings. He enlisted in the United States Air Force and served during the Korean Conflict. Following his honorable discharge, Gordy returned to the area. On December 21, 1957, Gordy married Marlys Westley at the Lutheran Church in Cottonwood. The couple lived in Marshall for a short time, then moved to Redwood Falls. Gordy worked as a mechanic, first for Scott-Preusse, then Burris Oldsmobile and later Baker Brothers. He then opened his own small engine repair shop. Gordy was a member of the American Legion and Gloria Dei Lutheran Church. He had a strong faith and regularly listened to church services on the radio and television. Gordy enjoyed collecting John Deere tractors and memorabilia and particularly enjoyed spending time with his family – especially his grandchildren and great-grandchildren. Gordy was a good guy. He is survived by his daughter Peggy (Dave) Kuehn of Redwood Falls; son-in-law Dwight Davis of Renville; grandchildren Chad Davis, Ron (Tasha) Kuehn, Dillon (Jen) Kuehn, Amber (Jim) Tisue, and Michelle (Curtis) Stellmacher; and great-grandchildren Madisyn and Carter Kuehn, Hunter and Jaxson Tisue, and Brayden and Paisley Kuehn. Gordy was preceded in death by his wife Marlys in August 2000, daughter Deb Davis, grandson Seth Kuehn, great-grandson Parker Tisue, three brothers, and two sisters. Blessed be his memory.

The family of Gordon Pederson created this Life Tributes page to make it easy to share your memories.

Send flowers to the Pederson family.