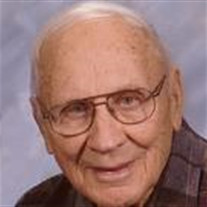 PLEASE NOTE CHANGE OF TIME Gordon A. Carlson, 94, of Morgan died Wednesday, October 19, 2016 at Gil-Mor Manor in Morgan. Mass of Christian Burial will be held at 1:30 P.M. ON SATURDAY, OCTOBER 22, 2016 from St. Michael’s Catholic Church in Morgan with burial to follow in the church cemetery. Visitation will be held on Friday, October 21, 2016, from 5 until 7 p.m., at Nelson-Hillestad Funeral Home in Morgan and will continue on Saturday, FROM 12:30 UNTIL 1:30 P.M. at the church. Arrangements are with Nelson-Hillestad Funeral and Cremation Service of Morgan. E-mail condolences may be sent via www.nelson-hillestad.com. Gordon Adam Carlson, the son of Elmer and Justina (Goblirsch) Carlson, was born June 22, 1922 in Pocahontas, Iowa. When he was six years old, Gordon moved with his family to Morgan Township where they farmed. He grew up on the family farm and received his education at the nearby country school. On June 22, 1943, Gordon married Rose Kober in St. Michael’s parsonage. The newlyweds made their home with his parents and Gordon farmed with his father. Following harvest, Gordon and Rose moved to a farm north of Morgan where they farmed for a year. They then moved to another farm and, in 1954, returned to the Carlson home farm. Gordon officially retired from farming in 1994, when he and Rose moved into Morgan. He helped on the farm until he was 86, but he never really actually retired. Gordon was a member of St. Michael’s Catholic Church where he volunteered for the men’s church dinners and belonged to the Knights of Columbus. He was a member of the Morgan Farmer’s Elevator Board and belonged to the Morgan Sportsmen’s Club. Gordon was a farmer; his hobby was going for drives to check the crops. He liked horses – from the draft horses he started farming with, to the pleasure horses he bought for his kids. Gordon rode a bit and, in his younger years, drew horses. Gordon enjoyed going for drives along the river bottom, eating ice cream cones and, occasionally bowling. He loved his grandkids and great-grandkids. Farming was Gordon’s passion; he was so pleased that another generation is taking over the family’s Century Farm. Gordon is survived by his wife Rose of Morgan; and children Betty Murray of Tulsa, Oklahoma, Jack (Char) Carlson of Morgan, Sandy Carlson of Morgan, Nancy Carlson of Renton, Washington, and Jim (Kelly) Carlson of Olivia. Also surviving are his grandchildren Lisa (Aaron) Windsor of Tulsa, Adam (Kirstin) Carlson of Elk Point, South Dakota, Ryan Carlson of Bloomington, Jason Carlson of Morgan, Jennifer Ward of Federal Way, Washington, and Tarah (Cyle) Cavett of Fargo, North Dakota; and great-grandchildren Zoe, Alex, Titus, and Porter. He was preceded in death by his sisters Eunice Koll and Calverna “Sally” Senger. Blessed be his memory.

The family of Gordon A. Carlson created this Life Tributes page to make it easy to share your memories.

Send flowers to the Carlson family.