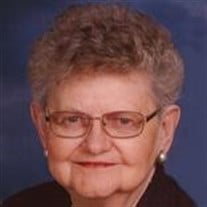 Gladys M. (Zempel) Raddatz, 87, of Morgan died Wednesday, June 14, 2017 at Gil-Mor Manor in Morgan. Funeral services will be held at 10:30 a.m. on Saturday, June 17, 2017 from Zion Evangelical Lutheran Church in Morgan with burial to follow in the Morgan City Cemetery. Visitation will be held Friday, June 16, 2017, from 4 until 8 p.m., at the Nelson-Hillestad Funeral Home in Morgan and will continue on Saturday, from 9:30 until 10:30 a.m., at the church. Arrangements are with Nelson-Hillestad Funeral and Cremation Service of Morgan. E-mail condolences may be sent via www.nelson-hillestad.com. Gladys Mae (Zempel) Raddatz, daughter of Walter and Alma (Schultz) Zempel was born on May 16, 1930 on the family farm in Morgan Township, Redwood County. She grew up on the family farm and received her formal education at Morgan Public School, graduating in 1948. On August 30, 1950, Gladys married Marlin Raddatz at St. John Lutheran Church in Morgan. They lived on and operated the Zempel family farm near Morgan. Marlin and Gladys were virtually inseparable for over 65 years until his death in 2016. Gladys was a member of St. John Evangelical Lutheran Church in Redwood Falls. Gladys lived for her family, loving it when they’d come to visit. She was most happy cooking and baking and serving both her family and friends "a little lunch" or meals when they’d stop by. Gladys died on Wednesday morning, June 14, 2017 at Gil-Mor Manor in Morgan. She had attained the age of 87 years and 29 days. Gladys is survived by her children Joleen Wendinger of New Ulm, Randy (Shelly) Raddatz of Excelsior, Ron (Janet) Raddatz of Morgan, and Jerry (Jan) Raddatz of Redwood Falls; 14 grandchildren; 22 great-grandchildren; two great-great-grandchildren; brother-in-law Loren of Morgan; sister-in-law Darlene of Rosemount; and many nieces and nephews. She was preceded in death by her parents, husband Marlin, son-in-law Paul Wendinger, sisters- and brothers-in-law Martha Raddatz, Lyle Raddatz, Harlan and LaDonna Raddatz, and Darlene and Delmer “Jim” Blume. Blessed be her memory.

The family of Gladys Mae Raddatz created this Life Tributes page to make it easy to share your memories.

Send flowers to the Raddatz family.