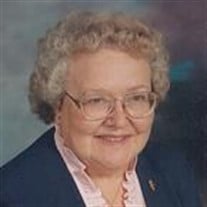 G. Elfriede Zamzow, 81, of Morgan died Wednesday, November 9, 2011 at Gil-Mor Manor. Funeral services will be held at 10:30 a.m. on Saturday, November 12, 2011 from St. John’s Lutheran Church in Morgan with burial to follow in the church cemetery. Visitation will be held Friday, November 11, 2011, from 4 until 7 p.m., at the Nelson-Martin Funeral Home in Morgan and will continue on Saturday at the church for one hour prior to services. Arrangements are with Nelson-Martin Funeral Service of Morgan. E-mail condolences may be sent via www.nelsonmartinfuneralservice.com. Gladys Elfriede Esther Zamzow, the daughter of Henry and Helene Zamzow, was born March 15, 1930. She was raised on the family farm near Morgan and received her formal education in Redwood County District 92 rural school and Morgan High School. She graduated Morgan High School in 1948 and immediately was hired by the State Bank of Morgan. Edfriede’s entire banking career was spent at the local bank, which was later renamed F & M Bank. She started as secretary, bookkeeper and teller and in 1962 was elected Assistant Cashier. Elfriede graduated from the Minnesota School of Banking in 1975 and in 1979 was elected Assistant Vice President of the bank. She was elected Vice President in 1980 and appointed Compliance Officer in 1983. Elfriede retired from F & M Bank in 1996. She was a member of St. John Lutheran Church in Morgan where she served as co-treasurer of the building fund, chairman of her work unit, treasurer of Naomi Circle, co-treasurer of St. John Improvement Fund and secretary-treasurer of Friendship Club. Elfriede also taught Sunday school and sang in the church choir. She belonged to the National Association of Bank Women, the Morgan Civic and Commerce Association, the Morgan Memorial Foundation, and served as treasurer of the Morgan Memorial Foundation Auxiliary. Elfriede was active in the 4-H program, serving as a Jr. Leader in her younger days and later as an adult leader. She enjoyed knitting, crocheting, crafts, bowling, playing piano and organ, camping, fishing, and spectator sports. Elfriede is survived by her sister-in-law Ardis (Gordon) Alexander of Vesta; nieces and nephews Mark (Lynn) Zamzow, Joel (Kris) Zamzow, Daniel Zamzow, Steve Zamzow, Beth Zamzow, Susie Zamzow (Frederick Vallen), and Paula Zamzow; and seven great-nieces and nephews. She was preceded in death by her parents; brothers Wilfried in 1978 and Edmund in 2000; and nephew Tim in 1984. Blessed be her memory.

The family of Gladys Elfriede Esther Zamzow created this Life Tributes page to make it easy to share your memories.

Send flowers to the Zamzow family.