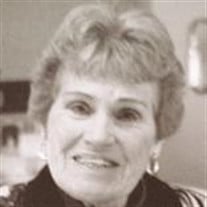 Gladys Angermeyr, 88, of Franklin and formerly of Morton died Tuesday, November 17, 2015 at Golden Living Center in Franklin. Mass of Christian Burial will be held at 10:30 a.m. on Monday, November 23, 2015 from St. Catherine’s Catholic Church in Redwood Falls with burial to follow in Calvary Cemetery, Morton. Visitation will be held Sunday, November 22, 2015, from 4 until 8 p.m., with prayer service at 7 p.m., all at Nelson-Hillestad Funeral Home in Redwood Falls. Visitation will continue on Monday at the church from 9:30 until 10:30 a.m. Arrangements are with Nelson-Hillestad Funeral Service of Redwood Falls. E-mail condolences may be sent via www.nelson-hillestad.com. Gladys Jean Angermeyr, the daughter of Harry E. and Kathleen (Flaherty) Foley, was born May 4, 1927 in Tucson, Arizona. She grew up in Tucson and graduated from Catalina High School in 1945. Gladys continued her education at Tucson School of Nursing, graduating as a Registered Nurse in 1948. On December 22, 1948, Gladys married William E. Angermeyr in Tucson. They lived in Phoenix from 1950 until 1953, where Bill was employed as a music teacher. In 1953, they moved home to Morton to begin farming with his father and brother. Gladys was a wonderful mother. She raised 11 children and taught them that education and community service is important. Gladys enjoyed an active life. She played golf into her 80s and bowled on a league in Redwood Falls for many years. After raising her children, she returned to nursing where she was charge nurse both at Redwood County Nursing Home and later Wood Dale Nursing Home where she mentored and trained many CNAs and LPNs. She will be remembered for her care as a Hospice nurse for Renville County Hospice program. Gladys was deeply involved in her church, St. John’s Catholic Church in Morton. She served as a religious education teacher, Eucharistic minister, and assisted Sister JoAnn with decorating the church for the liturgical seasons. Most of all, Gladys loved watching her children compete in athletic events, from track meets to volleyball games. She attended her grandchildren’s athletic events and cheered them on as well. Gladys will be remembered for her support and encouragement. She is survived by her children Suzanne (Russell) Serbus of Cleveland, James (Julie) Angermeyr of Eagan, Christine (Charles) Sanow of Marshall, Margaret (Patrick) Theisen of Elko, Elizabeth Angermeyr (Alan Deidrick) of Howard Lake, Dorothy (David) Jones of Eagan, Donna (Phil) Loveless of Plymouth, John (Stacey) Angermeyr of Morton, Patty (Dan) Bradway of Vadnais Heights, and Laura (Lance) Grewe of Hewitt; son-in-law Dale Burss of Nelson; 23 grandchildren; 17 great-grandchildren; and brother John Foley of Cerritos, California. Gladys joins her husband Bill and daughter Mary Burss, singing with the angels in heaven. Blessed be her memory.

The family of Gladys Jean Angermeyr created this Life Tributes page to make it easy to share your memories.

Gladys Angermeyr, 88, of Franklin and formerly of Morton died...

Send flowers to the Angermeyr family.