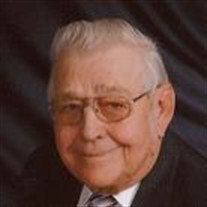 Gilbert Panitzke, 82, of Redwood Falls died Tuesday, August 4, 2015 at Seasons hospice in Redwood Falls. Funeral services will be held at 10:30 a.m. on Friday, August 7, 2015 from St. John Evangelical Lutheran Church in Redwood Falls with burial to follow in the Redwood Falls Cemetery. Visitation will be held on Thursday, August 6, 2015, from 4 until 7 p.m., at Nelson-Hillestad Funeral Home in Redwood Falls and will continue on Friday at the church for one hour prior to services. Arrangements are with Nelson-Hillestad Funeral Service of Redwood Falls. E-mail condolences may be sent via www.nelson-hillestad.com. Gilbert Emil Panitzke, the son of Herman Gustav and Mabel Johanna (Zubke) Panitzke, was born August 11, 1932 on the family farm in Redwood Township, Redwood County, Minnesota. He grew up on the farm and received his education in District 631 country school. Gilbert was inducted into the United States Army in January 1953 and was stationed in Germany with the 599th Field Artillery Battalion. He was honorably discharged in January 1955, having earned the rank of Corporal. On June 2, 1953, during his leave from the Army, Gilbert married Treonne Robinson at St. John Evangelical Lutheran Church in Redwood Falls. Gilbert returned to the service and, following his discharge, he and Treonne settled on the farm. Gilbert was a farmer and, later, also helped Treonne with her clothing stores. He retired from farming in 1995 and the couple moved into Redwood Falls in 2008. Gilbert was a life-long member of St. John Evangelical Lutheran where he was baptized in August 1932 and confirmed in May 1946. He served on the church council and finance committee for many years. Gilbert enjoyed woodworking, fishing and time spent at the lake cabin with his wife and family. Gilbert is survived by his wife Treonne of Redwood Falls; children Gail (Daryl) Borchardt of Prior Lake, Jeff Panitzke of Veseli, Michael (Jolene) Panitzke of Redwood Falls, and Jodi (Dave) Bunting of Redwood Falls; and grandchildren Jessica Kennedy, Michael Borchardt, Tiffany (Aaron) Breitkreutz, Brady (Teri) Panitzke, Tiana (Joshua) Iverson, Jamison (Jennifer) Panitzke, Marissa Panitzke, Dylan Ousky, Nicholas Ousky, and Bailey Bunting. Also surviving are his 13 great-grandchildren; and siblings Lloyd and Loretta Panitzke of Redwood Falls, Leroy and Rosemary Panitzke of Belview, Pete and Judy Panitzke of Sauk Centre, Dennis and Lois Panitzke of Redwood Falls, Doris and Walt Valentin of Fairfax, and Darlene and Loren Dallman of Redwood Falls. He was preceded in death by his brother Dean Panitzke. Blessed be his memory.

The family of Gilbert Emil Panitzke created this Life Tributes page to make it easy to share your memories.

Send flowers to the Panitzke family.