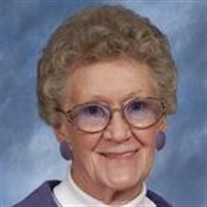 Gertie Zielsdorf, 93, of Redwood Falls passed away Tuesday, August 11, 2015 at Garnette Gardens in Redwood Falls. Funeral services will be held at 11 a.m. on Friday, August 14, 2015 from First United Methodist Church in Redwood Falls with Rev. Janiece Redman officiating. Burial will follow in the Redwood Falls Cemetery. Visitation will be held Thursday, August 13, 2015, from 5 until 7 p.m., at Nelson-Hillestad Funeral Home in Redwood Falls. Visitation will continue on Friday, at the church, for one hour prior to services. Arrangements are with Nelson-Hillestad Funeral Service of Redwood Falls. E-mail condolences may be sent via www.nelson-hillestad.com. Gertie E. Zielsdorf, the daughter of Egbert and Gertie (Elsing) Bodde, was born October 23, 1921 in Comfrey. She lived in Comfrey until the family moved to Shevlin, Minnesota for a couple of years. They then returned to Comfrey for a time before moving to North Redwood. Gertie met John Zielsdorf in North Redwood and they married there on November 25, 1939. They resided in North Redwood until moving to Redwood Falls in 1948. Gertie was a 29-year volunteer for the American Cancer Society Reach to Recovery program and was a member of the United Methodist Church. Over the years she enjoyed gardening, league bowling, playing bridge, and crocheting gifts for her family and friends. Gertie and John enjoyed many hours fishing in a peaceful area along the river near North Redwood. Besides making a home for her family, she worked at Morgan’s grocery in the bakery department for a few years. Gertie is survived by her daughters Phyllis Hitchell of Lakeville, Beverly (Dale) Mude of Wabasso, Suzanne (Richard) Schultz of Morgan, and Lori (Richard) Young of Burnsville; grandchildren Patrick Kascht, Sondra Miu, Greg Mude, Tonya Klinkner, Tina Lincoln, Justin Schultz, Jon Young and Jackie Young;12 great-grandchildren (and one on the way); and three great-great-grandchildren. She was preceded in death by her husband John in 1982, two grandchildren, one great-grandchild, two sons-in-law, two sisters, and a brother. We want to give special thanks to Dr. Danielson, the staff at Garnette Gardens and Hospice. Your gentle and compassionate care of our mother is greatly appreciated. We miss you Mom and will always love you and will cherish all of our wonderful memories. Your girls.

The family of Gertie E. Zielsdorf created this Life Tributes page to make it easy to share your memories.

Send flowers to the Zielsdorf family.