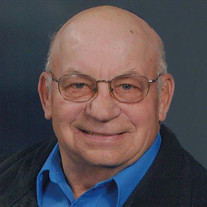 Gerald “Jerry” Vogl, 77, of Morgan died Sunday, July 22, 2012 at Gil-Mor Manor in Morgan. Mass of Christian Burial will be held at 10:30 a.m. on Wednesday, July 25, 2012 from St. Michael’s Catholic Church in Morgan. Burial, with military honors, will follow at the church cemetery. Visitation will be held Tuesday, July 24, 2012, from 4 until 8 p.m., at the Nelson-Martin Funeral Home in Morgan. A combined Knights of Columbus and Catholic Aid Rosary and parish prayer service will be held at 7 p.m. on Tuesday at the funeral home. Visitation will continue on Wednesday at the church for one hour prior to services. Arrangements are with Nelson-Martin Funeral Service of Morgan. E-mail condolences may be sent via www.nelsonmartinfuneralservice.com. Gerald Anton Vogl, the son of Frank and Anna (Heiling) Vogl, was born December 19, 1934 in Three Lakes Township, Redwood County. He grew up on the family farm west of Morgan and received his elementary education at the nearby country school. Jerry attended St. Michael’s Catholic School during his junior high years and graduated from Morgan High School. He was inducted into the United States Army in March 1955 and received training at the Army School of Surveying. Following his honorable discharge in March 1957, Jerry returned to the Morgan area and worked as a draftsman/surveyor/engineer for Redwood County Highway Department. On January 16, 1965, Jerry married Marilyn Rose Kerkhoff at St. Michael’s Catholic Church; they moved to a farm west of Morgan in July of that year. Jerry was a farmer/drainage surveyor until his retirement in 2002; during his retirement years, Jerry drove the school van for Cedar Mountain Schools for six years. In 2007, the couple moved into Morgan. Jerry was an active member of St. Michael’s Catholic Church where he served as a communion distributor, treasurer of the Catholic Aid Association, and a member of the Knights of Columbus. He also served on the parish council and continued to do volunteer work for the church his entire adult life. Jerry enjoyed old-time music, fishing, ice fishing, deer hunting, carpentry, inventing, dogs, sports, golfing, gardening, camping, playing cards with friends, and checkers with his grandchildren. He loved his wife, children and grandchildren very much. Jerry’s favorite past time was taking drives with his wife. Jerry bravely fought cancer since 1985, undergoing over 100 bladder surgeries at the Mayo Clinic. He is survived by his wife Marilyn of Morgan; son Scott (Teresa) Vogl of Morgan; daughter Jody Vogl of Woodbury; and grandchildren Rosemarie Vogl, Georgia Eilertson, Grant Eilertson, Desiree Otto, and Jacob Otto; and great-grandchildren Dawson and Dante. Also surviving are his siblings Delores Seifert of Minneota, Alice Zaske of Buffalo, and Tom (Carol) Vogl of Monticello. He was preceded in death by his parents; brothers James, Donald and Frank; sister Jeanette Vogl; brothers-in-law Harold Seifert and William Zaske, Jr.; parents-in-law Harold and Monica Kerkhoff; and brother-in-law Lonnie Kerkhoff. Blessed be his memory.

The family of Gerald "Jerry" Anton Vogl created this Life Tributes page to make it easy to share your memories.

Send flowers to the Vogl family.