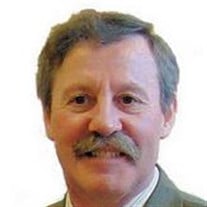 Gerald “Jerry” Reding, 57, of Willmar died unexpectedly at his home on Tuesday, February 1, 2011. A Memorial Mass will be held at 10:30 a.m. on Saturday, February 19, 2011 at St. Catherine’s Catholic Church in Redwood Falls with burial to follow at St. Michael’s Catholic Cemetery, Morgan. Visitation will be held on Saturday, February 19, 2011, from 9:30 until 10:30 a.m. at St. Catherine’s Catholic Church in Redwood Falls. Arrangements are with the Nelson-Martin Funeral Service of Redwood Falls. E-mail condolences may be sent via www.nelsonmartinfuneralservice.com. Gerald Andrew Reding, the son of Richard and Evelyn (Tauer) Reding, was born March 22, 1953 in Sleepy Eye. He was raised in the Morgan area. Jerry was a 1967 graduate of St. Michael’s Elementary School in Morgan, and a 1971 graduate of Morgan High School. He was inducted into the United States Army in July 1971. During his time in the Army, Jerry served in wheeled vehicle repair and maintenance and as a chauffeur; he served overseas for a year. His citations included the National Defense Service Medal, M-16 expert rating, and 1st Class Hand Grenade rating. Following his honorable discharge, Jerry attended Detroit Lakes AVTI where he earned boiler operator certification in 1977. He was employed by the Willmar Municipal Utilities until his retirement in 2010. Jerry, better known to his fishing and hunting friends as Idgett, enjoyed woodworking and restoring quality heirloom furniture. He also enjoyed fishing, hunting, and taking motorcycle excursions. Jerry is survived by his brothers Kenneth Reding of Howard Lake, Dennis Reding and wife Trish of St. Paul Park, and Randal Reding of Ironton; and sisters Theresa Sandeen and husband Doug of Glenwood, Patricia Simondet of Hutchinson, Marie Ireland and husband Dan of Mankato, and Jean Reding-Dott and husband Mark Dott of Denver, Colorado. He was preceded in death by his father Richard in 1967, his mother Evelyn in 2008, and his brother Charles in 2003. Blessed be his memory.

The family of Gerald "Jerry" Andrew Reding created this Life Tributes page to make it easy to share your memories.

Gerald “Jerry” Reding, 57, of Willmar died unexpectedly at his...

Send flowers to the Reding family.