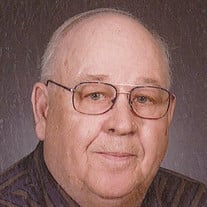 Gerald “Jerry” Peterson, 75, of Redwood Falls died Sunday, February 12, 2017 at his home. Funeral services will be held at 2 p.m. on Thursday, February 16, 2017 from St. John Evangelical Lutheran Church in Redwood Falls with burial to follow in St. John’s Cemetery, Sheridan Township. Visitation will be held Wednesday, February 15, 2017, from 4 until 7 p.m., at Nelson-Hillestad Funeral Home in Redwood Falls and will continue on Thursday, from 1 until 2 p.m., at the church. Arrangements are with Nelson-Hillestad Funeral and Cremation Service of Redwood Falls. E-mail condolences may be sent via www.nelson-hillestad.com. Gerald Grant Peterson, the son of Lloyd and Irene Peterson, was born March 10, 1941 in Morton. He grew up on a farm in Section 20 of Camp Township, Renville County, which was homestead by his grandfather’s grandfather, Halleck Peterson, in 1867. Jerry was baptized on March 30, 1941 and confirmed on May 6, 1956, both at St. Luke’s Lutheran Church in Franklin. He graduated from Franklin High School in 1959. His marriage to Patricia Buchholz took place at Zion Lutheran Church in Winthrop on July 29, 1967. They lived in Fridley and Blaine before moving to Redwood Falls in 1971. After working in Minneapolis, the Fairfax elevator, railroad, and tile company, Jerry began a career as a professional semi-tractor trailer driver for several companies. He hauled grain to Minneapolis, cattle to Montana, and Schwan’s frozen foods to most of the United States. Jerry also was employed at Zytec and Jackpot Junction. In 2000, he retired from truck driving and then drove school bus for Thielen Bus Lines of Redwood Falls until 2005. Jerry enjoyed vacationing “from ocean to ocean” with the family. He also enjoyed building model airplanes and attending the International Plastic Modelers Society conventions. Jerry was a league bowler for a number of years. He is survived by his wife Patricia of Redwood Falls; daughter Janine (Steve) Johnston of Rushford; son Justin Peterson (friend Jennifer Myhre) of Redwood Falls; brother Halleck Peterson of St. Paul; and grandchildren Braden and Braelynn Peterson of Redwood Falls. Jerry was preceded in death by his parents. Blessed be his memory.

The family of Gerald "Jerry" Peterson created this Life Tributes page to make it easy to share your memories.

Send flowers to the Peterson family.