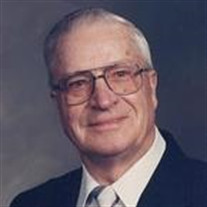 George Carruth, 96, of Redwood Falls died Saturday, April 28, 2012 at Wood Dale Home in Redwood Falls. Mass of Christian Burial will be held at 10:30 a.m. on Thursday, May 3, 2012 from St. Catherine’s Catholic Church in Redwood Falls. Burial will be held at a later date in the church cemetery. Visitation will be held Wednesday, May 2, 2012, from 4 until 7 p.m., at the Nelson-Martin Funeral Home in Redwood Falls and will continue on Thursday at the church for one hour prior to services. Arrangements are with Nelson-Martin Funeral Service of Redwood Falls. E-mail condolences may be sent via www.nelsonmartinfuneralservice.com. George Emery Carruth, the son of William James and Anna A. Schablin, was born February 10, 1916 in Beaver Falls, Minnesota. He attended local country schools. George was very musical and was playing the violin at house parties with his father when he was five years old. He could play any stringed instrument by ear; he later took correspondence courses in musicology and learned to read music. George was a member of several local bands, the last one being “The River Rats.” When he was a young man, he farmed with his family and hired out to other area farmers. On August 21, 1940, George was united in marriage to Loretta Eleanore Dommer in a civil ceremony in Minneapolis, where Loretta was working at the time and living with one of her aunts. They renewed their vows on June 11, 1958 in St. Catherine’s Catholic Church with Father Muellerleile officiating. George and Loretta both worked for Mixa Hatcheries. George was later hired by Baker Brothers Motors where he worked as a technician for over 30 years. He retired from Baker Brothers in 1978. George enjoyed fishing and hunting waterfowl and upland game; he would often go duck hunting before going to work in the morning. He enjoyed gardening, especially growing hybrid tea roses. After retirement George enjoyed spending summers at their lake cottage in Grand Rapids, Minnesota, which he built himself with help from his brothers Mike and Charlie. In the winter months he enjoyed working in his workshop – he could build or fix anything. George is survived by his daughter Kathy of Redwood Falls. He was preceded in death by his parents; his sisters Bess (Claude) Smith, Myrtle (Hank) Chroup, Evelyn (Fred) Haas, Nellie (George) Fullerton, Marion (Edward) Svoboda, Eileen (Lyndon) Sommers, Lillian ”Snooks” (George “Andy”) Ruhland, and Doris (Robert) Harold; brothers Willis Carruth, Harry (Corinne) Carruth Sr., Charlie (Genevieve) Carruth, and Marvin “Mike” (Jean) Carruth; and brother Raymond in infancy. Blessed be his memory.

The family of George Emery Carruth created this Life Tributes page to make it easy to share your memories.

Send flowers to the Carruth family.