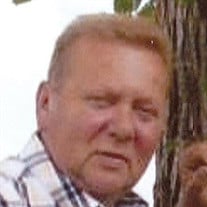 Gary “Blondie” Freitag, 59, of Franklin died Thursday, September 17, 2015 at Abbott-Northwestern Hospital in Minneapolis. A Memorial Service will be held at 11 a.m. on Thursday, September 24, 2015 from St. Luke’s Lutheran Church in Franklin. Visitation will be held at the church on Thursday from 9 until 11 a.m. Arrangements are with Nelson-Hillestad Funeral Service of Redwood Falls. E-mail condolences may be sent via www.nelson-hillestad.com. Gary Lee Freitag, the son of Lloyd and Genevieve (Weseloh) Freitag, Sr., was born September 2, 1956 in Redwood Falls. He grew up in Franklin and graduated from Franklin High School in 1975. Gary was baptized and confirmed in Zion Lutheran Church, Morton. Gary met Susan Welsch-Zempel in 1975. In 1976 their daughter, Angela, was born. Gary and Susan later went their separate ways, but remained friends. On July 21, 1978, Gary married Lisa Castle. They had two children, Heidi and Nathan, and were later divorced. Gary drove truck and farmed his entire life. He was self-employed and later worked for Munsell Farms. Gary was a hard worker. In his spare time, he enjoyed cruising the river bottom, grilling, going to the races, and watching Vikings football. Gary loved his children and grandchildren and enjoyed spending time with his family and friends. He was a member of St. Luke’s Lutheran Church. Gary is survived by his children Angela Welsch of Mankato, Heidi (Jesse) Blokzyl of Willmar, and Nathan Freitag (fiancé Crystal Menter) of Franklin; grandchildren Nevaeh, Jordyn, Cadence, LaDanyian “LJ”, Leeum and Carter; and siblings Lloyd (Colleen) Freitag Jr., Wayne (Linda) Freitag, and Linda (John) Hopp all of Franklin. He was preceded in death by his parents and his brother LeRoy. Blessed be his memory.

The family of Gary Lee Freitag created this Life Tributes page to make it easy to share your memories.

Send flowers to the Freitag family.