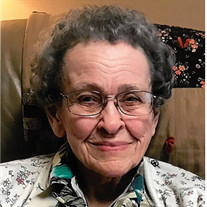 Florence K. Gewerth, 90 of Morgan died Saturday, August 18, 2018 at Gil-Mor Manor Nursing Home. Mass of Christian Burial will be held at 10:30 a.m. on Wednesday, August 22, 2018 from St. Michael’s Catholic Church in Morgan with burial to follow in the church cemetery. Visitation will be held Tuesday, August 21, 2018, from 4 until 7 p.m. with a prayer service at 7 p.m., at Nelson-Hillestad Funeral Home in Morgan. Visitation will continue Wednesday, from 9:30 until 10:30 a.m., at the church. Arrangements are with Nelson-Hillestad Funeral and Cremation Service of Morgan. E-mail condolences may be sent via www.nelson-hillestad.com. Florence Katherine Gewerth, the daughter of John and Nellie (Roeckers) Hacker, was born August 28, 1927 in New Ulm, Minnesota. She attended country school, St. Michael’s Catholic School and then High School in Morgan. On September 20, 1949, Florence married Joseph Schottenbauer of Clements at St. Michael’s Catholic Church and they had a son George together. Joseph died on October 23, 1950, when George was only 3 months old. Florence later married Loyd Gewerth of Morgan on October 13, 1953 at St. Michael’s Catholic Church, they had four children together and were married for 40 years before he passed away on January 10, 1994. She was a member of St. Michael’s Catholic Church and its CCW, Catholic Aid Association, Life member of Ladies Auxiliary of V.F.W. of Morgan and Chatter Club. Florence enjoyed playing cards, bingo, dominos, gardening, bowling and spending “time” with family and friends. Florence is survived by her five children, George (Cindy) Schottenbauer of Morton, Mavis Gewerth of Stillwater, Daniel (Rose) Gewerth of Redwood Falls, Cletus (Laurie) Gewerth of Morgan and Loren (Jody) Gewerth of Redwood Falls; brother, Donald (Mary) Hacker of Evan, MN; 11 grandchildren; and 12 great grandchildren. She was preceded in death by her parents; husband’s Joseph Schottenbauer and Loyd Gewerth; and two brothers in infancy. Blessed be her memory.

The family of Florence K. Gewerth created this Life Tributes page to make it easy to share your memories.

Send flowers to the Gewerth family.