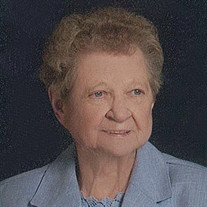 Florence Beilke, 87, of Morgan died Wednesday, September 25, 2012 at Gil-Mor Manor in Morgan. Funeral services will be held at 10:30 a.m. on Tuesday, October 2, 2012 from Zion Evangelical Lutheran Church in Morgan with burial to follow in Zion Lutheran Cemetery, rural Morgan. Visitation will be held at the church on Monday, October 1, 2012 from 4 until 7 p.m. and will continue on Tuesday for one hour prior to services. Arrangements are with Nelson-Martin Funeral Service of Morgan. E-mail condolences may be sent via www.nelsonmartinfuneralservice.com. Florence Viola (Kuester) Beilke, the daughter of Carl and Martha (Guse) Kuester, was born March 10, 1925 in New Ulm. She was baptized March 29, 1925 at St. Paul’s Lutheran Church in New Ulm and confirmed March 17, 1940 at St. Paul’s, New Ulm. Florence attended St. Paul’s Lutheran Grade School and New Ulm Public High School, graduating in 1944. She worked as the receptionist at Union Hospital until 1946. On October 26, 1946, Florence married Ruben Beilke. They farmed in Eden Township until 1972 when they moved into Morgan. Florence was a member of Zion Lutheran Church and active in the Ladies’ Guild. She was a volunteer at Gil-Mor Manor, served as a voting judge and on the library board. Florence also drove the school van. She collected newspaper clippings of weddings, births and deaths in her scrapbooks and loved to take day-trips with friends. She and Ruben went camping every summer and traveled the country. They also took many trips overseas. Florence is survived by her daughter Jean (Ernie) Broekemeier of Morgan; daughter-in-law Janet Beilke of Ojai, California; grandchildren Brian (Rachel) Broekemeier, Kevin Broekemeier, Heidi (Eric) Kasik, Brittany (Adam) Dutter, and Dustin Beilke; great-grandchildren Anica, Erik, Adam, Christian and Isaak Broekemeier, Jack Kasik, and Brayden and Addison Dutter; sister-in-law Helen Kuester; and brother-in-law Willard Beilke. She was preceded in death by her husband Ruben on August 27, 1981; her son Bruce on September 11, 2010; sisters Mabel Reinhart and Mildred Beilke; and brother Harold Kuester. Blessed be her memory.

Florence Beilke, 87, of Morgan died Wednesday, September 25, 2012 at Gil-Mor Manor in Morgan. Funeral services will be held at 10:30 a.m. on Tuesday, October 2, 2012 from Zion Evangelical Lutheran Church in Morgan with burial to follow in Zion... View Obituary & Service Information

The family of Florence Viola Beilke created this Life Tributes page to make it easy to share your memories.

Send flowers to the Beilke family.