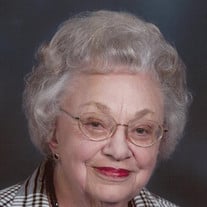 Evelyn M. E. Venable, 95, of Redwood Falls died Sunday, January 14, 2018 at Season’s hospice in Redwood Falls. Funeral services will be held at 10:30 a.m. on Thursday, January 18, 2018 from Gloria Dei Lutheran Church in Redwood Falls with burial to follow in Crestlawn Gardens, rural Redwood Falls. Visitation will be held from 4 until 7 p.m. on Wednesday, January 17, 2018, at Nelson-Hillestad Funeral Home in Redwood Falls and will continue on Thursday at the church from 9:30 until 10:30 a.m. Arrangements are with Nelson-Hillestad Funeral and Cremation Service of Redwood Falls. E-mail condolences may be sent via www.nelson-hillestad.com. Evelyn Margaret Esther Venable, the daughter of William and Nealy (Henning) Schmidt, was born August 8, 1922 in Johnsonville Township, Redwood County. She grew up on the family farm and received her elementary education in District 64 country school. Evelyn graduated from Lamberton High School in 1941. Following graduation, Evelyn worked in Fairmont at Serles Café before moving to Denver, Colorado to be with her sister. In Denver, Evelyn worked at Simmons Drug Store. There Evelyn met the love of her life, Winston E. Venable. On August 7, 1951, Evelyn and Winston were married at the Lowry Field Chapel in Denver. Evelyn accompanied Winston on his Air Force assignments to England (twice), Arizona, and Colorado. While living in England Evelyn enjoyed doing brass rubbings and ceramics, touring the English countryside, and taking trips to France, Holland, Scotland and Belgium. Evelyn also did a lot of volunteer work during her tours with Winston, including serving as a cashier in the school lunch program and working in the school library. She also volunteered with Little League refreshment stand, taught Sunday School and Vacation Bible School. After his discharge from the Air Force, the Venables settled in Redwood Falls and Evelyn worked at the Copper Kettle restaurant. She was a member of Gloria Dei Lutheran Church where she belonged to WELCA, served on the altar guild, helped with funerals, and did mission quilting. In her spare time, Evelyn enjoyed crocheting, embroidering, Bible studies and reading. She loved spending time with her granddaughters and being with family and friends. Evelyn is survived by her son Winston W. (Rosie) Venable of Redwood Falls; granddaughters Jaclyn (Pieter) Broodryk and Jennifer (Mark) Jansen; great-grandchildren Danika and Tucker Jansen; brother Devon (Mary) Schmidt; and sister Darlene Zimmerli. She was preceded in death by her parents; and sisters Helen Holznagel, Florence Cornell, and Ruth Ann Botten. Blessed be her memory.

The family of Evelyn M.E. Venable created this Life Tributes page to make it easy to share your memories.

Send flowers to the Venable family.