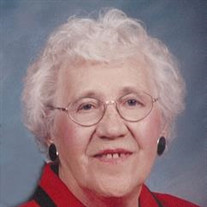 Evelyn Beasley, 100, of Redwood Falls died Monday, November 13, 2017 at Bethesda Grand Nursing Home in Willmar. Mass of Christian Burial will be held at 11:30 a.m. on Friday, November 17, 2017 from St. Catherine’s Catholic Church in Redwood Falls with burial to follow in the church cemetery. Visitation will be held Friday, from 10 until 11:30 a.m., at the church. Arrangements are with Nelson-Hillestad Funeral and Cremation Service of Redwood Falls. E-mail condolences may be sent via www.nelson-hillestad.com. Evelyn Marie Beasley, the daughter of Anton “Tony” and Jennie (Dworshak) Wertish, was born September 11, 1917 on a farm in Henryville Township, Renville County. When she was a month old, the family moved to a farm south of Bechyn. Evelyn grew up on that farm and received her elementary education in the nearby country school. She attended Redwood Falls High School until the age of 16, when she was needed to care for her ailing mother. On October 28, 1941, Evelyn married George Russell Beasley at St. Mary’s Catholic Church in Bechyn. They made their home in Olivia for a time, then moved to Redwood Falls. Evelyn was first and foremost a homemaker – and also worked part-time at Woolworths. In addition to her regular duties, she made the candy eggs that were sold at the store for Easter. Evelyn later went to work at Control Data where she was employed for many years. Evelyn was a member of St. Catherine’s Catholic Church. She loved spending time with family at the cabin on Eagle Lake. The Fourth of July at the cabin was a must. Evelyn also enjoyed traveling and camping with the family – they always had some sort of camper. Russell and Evelyn spent two winters in Texas and 15 winters in Yuma, Arizona – towing a camper, and later a 5th wheel, back and forth. Evelyn enjoyed holidays and birthday parties. She also liked to dance, play cards, garden, sew and embroider. Evelyn is survived by her children Jim (Sandy) Beasley of Denver, Colorado, Janis (Larry) Miller of Sunburg, Tom Beasley of Eagle Lake-Willmar, and Dave (Nancy) Beasley of Granite Falls. Also surviving are her grandchildren Scott, Lisa (Bryan), Lori, Kari (Ron), Jason (Jennifer), Jennifer (Kyle), Shannon (Luke), Sara, and Ryan (Mikayla); many great-grandchildren; and several great-great-grandchildren. She was preceded in death by her husband Russell; daughter and son-in-law Patty (Mike) Baune; and her brother Raymond Wertish. Blessed be her memory.

The family of Evelyn Beasley created this Life Tributes page to make it easy to share your memories.

Send flowers to the Beasley family.