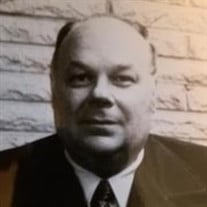 Eugene A. Ouren, long-time resident of Redwood Falls, died peacefully on January 28, 2021 at Carris Health – Redwood Hospital in Redwood Falls. Memorial services will be held at 10:30 a.m. on Wednesday, February 3, 2021 from Nelson-Hillestad Funeral Home in Redwood Falls with burial to follow in the Crestlawn Cemetery. Visitation will be held prior to the service from 9:30 a.m. until 10:30 a.m. on Wednesday, at Nelson-Hillestad Funeral Home in Redwood Falls. Arrangements are with Nelson-Hillestad Funeral and Cremation Service of Redwood Falls. E-mail condolences may be sent via www.nelson-hillestad.com. Eugene Allen Ouren was born to Milton and Irene (Erdmann) Ouren in Hanska, Minnesota, on April 26, 1932. Eugene grew up in Hanska and graduated from Hanska High School in 1950. He lived in Pennsylvania from 1950-1952 and then joined the Air Force in 1952, serving in various states and countries till his honorable discharge in 1956. Eugene then moved around the country until 1962 when he moved to Redwood Falls. He met the love of his life, Deloris Altmann. They were married on January 25, 1964, in Redwood Falls. They made their home in Redwood Falls and raised their daughter, Brenda. Eugene worked as a car salesman and in Tersteeg’s grocery department. He was active over the years in the community on the Police Commission, Planning Commission and Port Authority. He loved league bowling and playing horseshoes. Eugene is survived by his loving wife, Dee of Redwood Falls and daughter, Brenda Ouren from Elk River, Minnesota, grandson, Mitchel Ouren of Monticello. Siblings- Dorothy Strom of Robbinsdale, Beverly Hutton of Gettysburg, and Dianna Steinmetz of Grand Rapids. Eugene is preceded in death by his parents, Milton and Irene Ouren, and brother, David. Blessed be his memory.

The family of Eugene Allen Ouren created this Life Tributes page to make it easy to share your memories.

Send flowers to the Ouren family.