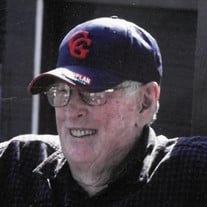 Eugene W. Caven, 96, of Redwood Falls died Wednesday, September 23, 2020 at Carris-Health, Willmar, Minnesota. A private family Mass of Christian Burial will be held at St. Catherine’s Catholic Church of Redwood Falls with the burial to follow at Calvary Catholic Cemetery in Morton. Arrangements are with Nelson-Hillestad Funeral and Cremation Service of Redwood Falls. E-mail condolences may be sent via www.nelson-hillestad.com. Gene was a lifelong farmer even after he retired. He loved the land, was kind to his animals, and was the type of neighbor everyone wished they had. Gene could fix anything. He was a mechanic, a craftsman, and a furniture maker. Most every family member has a treasured piece of his fine work, as did the St. John Catholic Church of Morton. As a dad, he was a silent leader who led by his great example rather than words. He imparted his strong work ethic to all of his children, which has since been passed to the next generation. Gene grew up during the great depression. He always made do with what he had and was thankful for it. Gene was never late for anything. Gene knew God, family and friends were more important than money and he was rich in those terms. Gene was generous with his time and was active as a life member of the Knights of Columbus, member of the St. John’s Choir and Cemetery Board, 4-H leader and mentor to his children and grandchildren. Gene was a very sharp card player. He had the ability to know what was in the other players hand after the first card was played. Gene and Dorothy were a team. You seldom said the name of one without the other. They were inseparable and now they are together again forever. Gene and Dorothy loved to dance and after 70 years, however, Gene did say he was getting tired of always winning the anniversary dance at wedding receptions. After building their home in Beaver Falls, Gene and Dorothy took great interest in feeding the birds on their deck and watching them from the kitchen table. The appearance of a Cardinal was always a special moment. Eugene W. Caven, age 96, died on Wednesday, September 23, 2020 at Carris Health-Rice Memorial in Willmar, Minnesota. He is survived by his children - Barb Tighe of Morton, Pat (Larry) Von Mosch of Cedar, Minn., Mike (Nancy) Caven of Ashland, Wisc., Tim (Nancy) Caven of Pennock, Minn., Laura (John) Synstegaard of Waconia, Minn. 11 grandchildren and 10 beloved great grandchildren. Also survived by sister Kathryn Schmitt of Winsted, Minn. He was preceded in death by his parents Leo and Johanna Caven, wife Dorothy, brothers James and Charles, sisters Rose, Virginia, and Victoria, and son-in-law Earle Tighe. In lieu of flowers, memorial contributions to St. John’s Catholic Church Cemetery Fund are appreciated. Blessed be his memory.

The family of Eugene 'Gene' Caven created this Life Tributes page to make it easy to share your memories.

Send flowers to the Caven family.