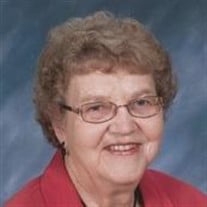 Erma “Jean” Thiesen, 86, of Redwood Falls died Friday, July 1, 2011 at the Redwood Area Hospital. A memorial service will be held at 2 p.m. on Wednesday, July 6, 2011 from First United Methodist church in Redwood Falls with Rev. Janiece Redman and Rev. Mark Bellows officiating. Burial will be private. Visitation will be held on Wednesday, July 6, 2011, from 1 until 2 p.m. at the church. Arrangements are with Nelson-Martin Funeral Service of Redwood Falls. E-mail condolences may be sent via www.nelsonmartinfuneralservice.com. Erma Jean Thiesen was born June 13, 1925, in Jackson, Minnesota to Chris and Julia Sorenson. She attended Jackson Elementary School and Lakefield High School. She later attended the Hamline/Asbury School of Nursing and was a member of the Cadet Nursing Corps graduating in 1947. On July 16, 1947, she married Jim Thiesen and they resided on a farm south of Lakefield from 1947-1961. There she and Jim started to raise their family of two sons and a daughter. Jean worked as a Registered Nurse in Worthington and in Spirit Lake, Iowa. In 1961 the family moved to Redwood Falls, a town whose beauty had attracted them. Jean continued her nursing career at the Redwood Falls Hospital for ten years, and then worked as the Redwood Falls school nurse from 1971-1978. Jean enjoyed her active involvement in the communities where she lived. She was Worthy Matron in the Lakefield Chapter of Eastern Star. In Redwood Falls, she was a member of ReVera Study Club, Hobby Club, Bridge Club(s) and the Reader’s Group at Reede Gray School. She was the president of the Ladies Golf Association. Jean was an active member of the Redwood Falls United Methodist Church. She was a resident of Homestead Cooperative of Redwood Falls since 1999 and served as the secretary of its board of directors. Jean felt lucky to have the chance to travel and, over the years, she and family members visited Venezuela, Brazil, Austria, Hawaii and New Braunfels, Texas. She made 29 visits to Portland, Oregon to visit her daughter and her family. Her life was full of good cheer and good times. An avid sports fan, last year Jean and a son celebrated her 85th birthday at a Twins game in their new stadium. Her friends could count on her good sense of humor, spontaneity, and caring nature. Last month Jean celebrated her 86th birthday by driving herself to the Twin Cities where family attended the graduation celebration of her nephew’s son. Later that day, her two sons and their spouses had fun at a birthday dinner eating cake she and a daughter-in-law had baked, and playing a game of dominos. On that Sunday, she enjoyed a last shopping trip, buying a few things at Alfred Dunnerone of her favorite stores. After returning home to Redwood Falls, she fell ill and was hospitalized. Jean is survived by children Craig Thiesen and wife Vicki Lofquist of St. Paul, Richard Thiesen and wife Kathy of Brooklyn Park, and Jan Regnier and husband Greg of Portland, Oregon; grandsons Matt Thiesen of Los Angeles, California and Jesse Regnier of Colorado Springs, Colorado, and granddaughter Christine Regnier of Portland, Oregon. Jean was preceded in death by her husband, James “Jim” Thiesen, her parents Chris and Julia Sorenson; brothers Russell Page, Rolland Page, Marion Sorenson, and John Sorenson; and sisters Carol Garber, Ida Ohl and Josephine Gilbert. Jean will be greatly missed by family and her many friends. Blessed be her memory.

The family of Erma "Jean" Thiesen created this Life Tributes page to make it easy to share your memories.

Send flowers to the Thiesen family.