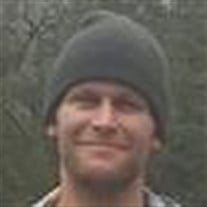 Eric Green, 34, of Franklin died Thursday, May 5, 2016 as the result of a ATV accident. Mass of Christian Burial will be held at 10:30 a.m. on Wednesday, May 11, 2016 from St. Michael’s Catholic Church in Morgan with burial at a later date in the church cemetery. Visitation will be held Tuesday, from 4 until 8 p.m., with a prayer service at 7:30 p.m., all at Nelson-Hillestad Funeral Home in Morgan and will continue on Wednesday, from 9:30 until 10:30 a.m., at the church. Arrangements are with Nelson-Hillestad Funeral and Cremation Service of Morgan. E-mail condolences may be sent via www.nelson-hillestad.com. Eric Lee Green, the son of Shirley (Tauer-Green) and Ron Welter, and the late James Green, was born January 13, 1982. He grew up in the Morgan area and graduated from Cedar Mountain High School. Eric was employed as a mechanic at Southern Minnesota Beet Sugar Cooperative (SMBS) in Renville. Eric enjoyed life and would always share a big smile and a friendly hello. He loved spending time with his son, Dante, family and friends. Eric is survived by his son Dante Otto of Morgan; mother Shirley (Ron) Welter of Cold Spring; sister Stacy Green, and children Alexis, Tyler, Kaylee, and Caleb of Madelia; brother Jared (Stacy) Green, and children Haily, Paige, and Sutter of Comfrey; grandparents Ruth Green-Simonson, and Eugene and Martha Tauer all of Morgan; many aunts, uncles, cousins – and most of all his friends. He was preceded in death by his father James M. Green in 2000; and his grandfathers Denis Green in 1999 and Bernard Simonson in 2014. Blessed be his memory.

The family of Eric Green created this Life Tributes page to make it easy to share your memories.

Send flowers to the Green family.