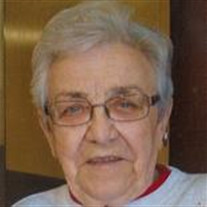 Elsie Valentin, 90, of Franklin died Thursday, October 1, 2015 at Sunwood Good Samaritan Care Center in Redwood Falls. Funeral services will be held at 10:30 a.m. on Tuesday, October 6, 2015 from St. Luke’s Lutheran Church in Franklin, with burial to follow in the Morton City Cemetery. Visitation will be held at the church on Tuesday from 9:30 until 10:30 a.m. Arrangements are with Nelson-Hillestad Funeral Service of Redwood Falls. E-mail condolences may be sent via www.nelson-hillestad.com. Elsie Marie Valentin, the daughter of Joseph and Anna (Novack) Zeman, was born March 28, 1925 in Franklin. She graduated high school in 1944. On March 2, 1946, Elsie married Ray White. They resided in Gaylord and then Lafayette. Ray died on February 11, 1964. Elsie then moved to Franklin where she resided until the time of her death. On July 2, 1966, Elsie married Ralph Johnson. He preceded her in death on January 6, 1979. On February 14, 1981, Elsie married Karl Valentin and they resided on the Valentin farm in rural Franklin. Elsie worked as a waitress for a time and then was hired as Postmaster of Franklin in 1965 – a position she held until retiring in 1980. She was a “people person” and, in her spare time, loved to quilt. Elsie and her friends made many quilts to share with their loved ones. She and Karl had a huge garden; Elsie took pride in canning vegetables – particularly sweet corn – and enjoyed making jam. She was a member of St. Luke’s Lutheran Church where she was active in the Ladies’ Aid, taught Sunday school and served as the Sunday school superintendent. Elsie is survived by her husband Karl of Franklin; daughter Sharon (John) Anderson of Duluth; son Jim (Linda) White of Northfield; five grandchildren; 12 great-grandchildren (and one on-the-way); sister Evelyn Gewerth of Morton; and sisters in-law Janell Lieske of Franklin, and Millie Briard of Oregon. Also surviving are her brothers- and sisters-in-law Martha Keil of Redwood Falls, Bill (Lela) Valentin of Burnsville, Walter (Doris) Valentin of Fairfax, Arnie (Arlene) Valentin of Park Rapids, Bruno (Loretta) Valentin of Mandan, North Dakota, Jim (JoAnn) Valentin of Marshall, Mary Ann (Bill) Ruhland of Battle Lake, Bob (Pam) Valentin of Franklin, John Valentin of Lamberton, and Margaret (Merlin) Andersen of Normal, Illinois; and several nieces and nephews. She was preceded in death by her first husband Ray White; her second husband Ralph Johnson; brother Joe Zeman, Jr.; sister Lillian Steinbeisser; brother-in-law Richard; and sister-in-law Helen. Blessed be her memory.

The family of Elsie Marie Valentin created this Life Tributes page to make it easy to share your memories.

Send flowers to the Valentin family.