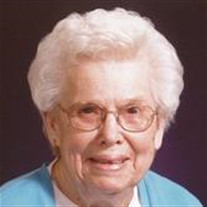 Ellen Nelson, 97, of Redwood Falls died Sunday, October 23, 2016 at Sunwood Good Samaritan Care Center. Memorial Services will be held at 11 a.m. on Thursday, November 3, 2016 from First Presbyterian Church in Redwood Falls with inurnment to follow in the Redwood Falls Cemetery. Visitation will be held Thursday, November 3, 2016, from 10 until 11 a.m., at the church. The family prefers memorials be directed to the American Cancer Society or the Phillips Eye Clinic. Arrangements are with Nelson-Hillestad Funeral and Cremation Service of Redwood Falls. E-mail condolences may be sent via www.nelson-hillestad.com. Ellen Rose Nelson, the daughter of Max and Adelle (Heimer) Karo was born April 7, 1919 in Redwood Falls. She grew up in Redwood Falls and was baptized, and later confirmed in October 1930, in the First Presbyterian Church. Ellen received her formal education in Redwood Falls Public School and graduated from Redwood Falls High School in 1937. Following graduation, Ellen worked at the Buhner Floral Shop (most recently known as Blossom Town). On June 18, 1941, Ellen married Maurice Edward Nelson and they lived on and farmed the Nelson farm. Maurice passed away in July 1990 and Ellen continued to live on the farm until moving into Garnette Gardens, Redwood Falls, in January 2009. She moved to Sunwood Care Center in February 2015. Ellen was a life-long member of the First Presbyterian Church where she was active in Ruth Circle and the Piece Makers Quilting Club. While living on the farm, Ellen particularly enjoyed taking care of her flower garden. She belonged to several coffee clubs, including the farm neighborhood coffee group, the Tuesday Club, Birthday Club, and Thursday Club. She belonged to Extension in her younger years. During her last few years on the farm, Ellen spent many afternoons having coffee with her very special friend, Lila Hoffman. Ellen was “the hostess supreme.” She made gallons of coffee and innumerable meals, and was gracious and welcoming to her guests – both those expected and unexpected. Ellen always had morning and afternoon lunch ready for the men working in the field. Ellen is survived by her daughter Patricia Mikita of Colorado Springs, Colorado; son Richard (Susan) Nelson of Redwood Falls; grandchildren Sundee (Bruce) Dobek of Summerville, South Carolina, Wendy (Tim) King of Colorado Springs, Jennifer (Brent) Critchfield of Harker Heights, Texas, Rebecca (Jon) Hensch of Tracy, Deborah (Scott) Lensing of Waconia, and Todd (Erin) Nelson of Orange City, Iowa. Also surviving are 15 great-grandchildren; four great great-grandchildren; sisters Edna Horkey of Westbrook, and Anna Anderson of St. Peter; sister-in-law Shirley Zimmer of Redwood Falls; and many nieces and nephews. She was preceded in death by her husband Maurice in 1990; stillborn son; sister Margaret Drummond; brother George Karo; and sons-in-law Paul Hauptli and James Mikita. Blessed be her memory.

The family of Ellen Nelson created this Life Tributes page to make it easy to share your memories.