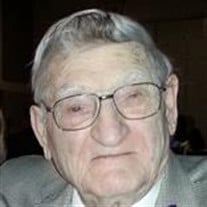 Einar W. Nelson, a.k.a. Wally Nelson, 91, of Redwood Falls died Tuesday, January 24, 2017 at North Memorial Medical Center in Robbinsdale. Funeral services will be held at 10 a.m. on Saturday, January 28, 2017 from Gloria Dei Lutheran Church in Redwood Falls with military honors to follow. Burial will be at Crestlawn Cemetery, rural Redwood Falls. Visitation will be held Friday, January 27, 2017, from 4:30 until 7:30 p.m., at Nelson-Hillestad Funeral Home in Redwood Falls and will continue on Saturday, from 9 until 10 a.m., at the church. Arrangements are with Nelson-Hillestad Funeral and Cremation Service of Redwood Falls. E-mail condolences may be sent via www.nelson-hillestad.com. Einar Wallace Nelson, the son of Bror Oscar and Mildred (Glass) Nelson, was born December 9, 1925 on a farm northeast of Wabasso. In 1934, the family moved to a farm seven miles southwest of Redwood Falls. Einar was a founding member of the Four Leaf Clovers 4-H club and attended rural school through the eighth grade. In the fall of 1939, he entered Redwood Falls High School where he lettered in wrestling. Einar graduated high school in 1943 and worked on the farm until he was drafted into the United States Army in 1945. He served our country in Okinawa and Seoul Korea and was honorably discharged in 1947. Einar worked on the farm that summer and, in the fall, enrolled in the University of Minnesota, St. Paul, where he pursued a major in agronomy and a minor in animal husbandry. He was a member of the Alpha Gamma Rho Fraternity. In the spring of 1948, Einar met Clarice Moline and they were married September 10, 1949, in the Trinity Lutheran Homelike Church of Minnehaha Falls, Minneapolis. Following their honeymoon to points north and west, they moved into an apartment above her parents’ home on Franklin Avenue and Einar continued his education at the U of M. In the spring of 1951, the couple moved to the Nelson family farm in rural Redwood Falls where they lived and farmed for the next 40 years. Einar served as an adult leader of the Four Leaf Clovers 4-H Club and was a member and treasurer of the Redwood Falls Township Board for many years. He belonged to the Redwood Falls American Legion and V.F.W. posts and was involved in league bowling and league golf. Einar was a member of Gloria Dei Lutheran Church and the men’s Lutheran Brotherhood organization. He is survived by his children Jan Craig Nelson of Redwood Falls, Timothy Wade Nelson (Beth) of St. Cloud, Shareen Nelson Neumann (David) of Slayton, and Michael Wallace Nelson (Debra) of Redwood Falls; grandchildren Nathan, Matthew, and Andrew Nelson, Erin Neumann Nelson and Brad Neumann, and Jeffrey and Josh Nelson; and great-grandchildren Lucas Nelson, Ellie, Isaiah, Myles, and Maddox Nelson, and Jordyn Nelson. Einar was preceded in death by his parents; his wife Clarice in 2012; his brother Vernon in infancy; and his sisters Elaine Werner and Eleanor Berndt. Blessed be his memory.

The family of Einar W. Nelson created this Life Tributes page to make it easy to share your memories.