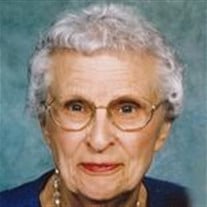 Edna Kalk, 92, of Morgan, died Sunday, April 24, 2016 at Gil-Mor Manor in Morgan. Funeral services will be held at 2 p.m. on Wednesday, April 27, 2016 from Zion Evangelical Lutheran Church in Morgan with burial to follow in Zion Evangelical Lutheran Cemetery. Visitation will be held on Wednesday, April 27, 2016, from 1 until 2 p.m. at the church. Arrangements are with Nelson-Hillestad Funeral and Cremation Service of Morgan. E-mail condolences may be sent via www.nelson-hillestad.com. Edna Pearl Kalk, the daughter of Henry and Emilia (Mielke) Struckman, was born January 14, 1924. She grew up in the Morgan area and graduated from Morgan High School on May 28, 1942. Edna graduated from teachers’ training in Lamberton in 1943 and was hired to teach all eight grades in Redwood County District 92 – the Elmer Bendixen School. She taught at many rural schools in Redwood County and grades kindergarten through sixth grade in Clements and Evan public schools. Edna earned her Bachelor of Science in Education from Mankato State University and, in 1970, began teaching sixth grade in Sleepy Eye. She retired at the end of the 1982 school year, having spent 38 years teaching elementary children. Edna loved science and instilled that love in her students who then won many awards at the state science fair. On June 1, 1947, Edna married Norman Kalk. They enjoyed traveling together and visited nearly every state in the country. Edna and Norman took a seven-country tour in Europe and, in their retirement, spent winters in Mission, Texas. Edna enjoyed flower and vegetable gardening. She shared her garden’s bounty with others through canning and preserving. Edna loved cooking, baking, fishing, entertaining family, and following the Minnesota Twins. She had a gentle, kind, loving, giving, and generous spirit. Edna was a member of Zion Evangelical Lutheran Church. She loved her church and spent many years teaching Sunday School and Vacation Bible School. She was an active member of the VFW Auxiliary and served as State Chaplain. Edna loved attending army reunions, POW/MIA conventions, and veterans’ meetings and events; she was very involved in the VFW, POW, and DAV organizations. She is survived by many nieces, nephews, great-nieces and nephews, and great-great-nieces and nephews. Edna was preceded in death by her husband Norman in 2006; her parents; brothers Fredrick, Alfred, Henry Jr.; sisters Helen, Mabel, and Janice; niece Kerri; and great-nieces Jaspora and Amber. Blessed be her memory.

Edna Kalk, 92, of Morgan, died Sunday, April 24, 2016 at Gil-Mor Manor in Morgan. Funeral services will be held at 2 p.m. on Wednesday, April 27, 2016 from Zion Evangelical Lutheran Church in Morgan with burial to follow in Zion Evangelical... View Obituary & Service Information

The family of Edna Kalk created this Life Tributes page to make it easy to share your memories.

Send flowers to the Kalk family.