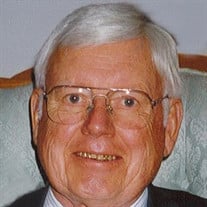 Dr. Douglas “Doug” Hagg, 88, of Redwood Falls died Tuesday, August 22, 2017 at Season’s hospice in Redwood Falls. Memorial Services will be held at 10:30 a.m. on Saturday, September 9, 2017 from the Evangelical Free Church of Redwood Falls. Inurnment will be held at 2 p.m. in the Hector City Cemetery. Visitation will be held Friday, September 8, 2017, from 4 until 6 p.m., at Nelson-Hillestad Funeral Home in Redwood Falls and will continue on Saturday, from 9:30 until 10:30 a.m., at the church. The family prefers memorials be directed to The Gideons International (P.O. Box 565, Redwood Falls, MN) or the Evangelical Free Church of Redwood Falls Building Fund (P.O. Box 97, Redwood Falls, MN). Arrangements are with Nelson-Hillestad Funeral and Cremation Service of Redwood Falls. E-mail condolences may be sent via www.nelson-hillestad.com. Dr. Douglas Duane Hagg was born in Minneapolis, Minnesota on January 13, 1929 to William O. and Mildred (Anderson) Hagg. He grew up on the family farm near Hector, and graduated from Hector High School in 1947. At First Lutheran Church he was baptized and confirmed, and was a member of their choir. In high school he performed in plays and musicals, and while attending Gustavus Adolphus College, he was a member of the traveling choir. At the University of Minnesota, he was a member of the Alpha Gamma Rho fraternity. He graduated with a Bachelor of Science degree in 1951, and went on to receive a Doctor of Veterinary Medicine degree. At the University of Wisconsin, Madison, he completed a year of post-doctorate study in microbiology. Following marriage to Barbara Ellen Geddes, the couple began their family and moved to Dawson. Dr. Hagg began veterinary practice there, treating both large and small animals. He became a member of Grace Lutheran Church, and was church board chairman, helping to facilitate the building and completion a large educational addition. He was also board chairman of the Dawson Chamber of Commerce when a large feed mill and senior living center were built. After 17 years in Dawson, the family moved Kalamazoo, Michigan, where Dr. Hagg conducted research for Pfizer Pharmaceuticals. Doug and Barb then moved to Redwood Falls. He practiced veterinary medicine there and also in Olivia. He also worked for the Federal Department of Agriculture. Doug and Barb have been members of the Evangelical Free Church. They have also been members of Gideon’s International for over 35 years. Doug taught Bible studies to prison inmates for over three decades. Doug earned commercial and private pilot licenses along with instrument rating. He enjoyed taking the family, their dog, and friends on vacations by air throughout the U.S. and Canada. With his commercial license, he flew groups of fishermen to Canada. He was an avid reader, and enjoyed sailing, hiking, and skiing. Doug entered into the joy of heaven on August 22, 2017. He is survived by his loving wife, Barb; their daughters Jacqueline (Michael) Weaver of Vienna, Austria and Carla (Barry) Becklin of Edina; and son William Hagg of Redwood Falls. His cherished grandchildren are Hosanna (Rob) Stump, Kristiana (Captain Caleb) Goble, First Lieutenant Amelia Weaver, and Jonmichael Weaver; along with beloved great-grandchildren. He is also survived by his dear sisters Joan (John) Streed, Carol Huston, and Ruth (Richard) Kepp. Doug as a man of faith, a gentleman and a scholar, devoted to family and friends. He will always be cherished.

The family of Douglas "Doug" Hagg created this Life Tributes page to make it easy to share your memories.

Send flowers to the Hagg family.