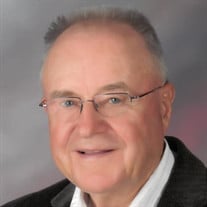 Douglas Emil Bandemer, 88 of Morgan, Minnesota passed away on Tuesday, August 10 at Hennepin County Medical Center, Minneapolis, Minnesota. Funeral Service will be held at 11 a.m. on Saturday, August 14, 2021 at the Zion Lutheran Church in Morgan, MN with burial at the Eden Methodist Cemetery in Eden Township. Visitation will be held Friday, August 13, 2021, from 4 until 7 p.m. at Zion Lutheran Church in Morgan and Saturday beginning at 10:00 a.m. before the funeral service. Arrangements are with Nelson-Hillestad Funeral and Cremation Service of Redwood Falls and Morgan. Email condolences may be sent via www.nelson-hillestad.com. Douglas was born to Walter and Mildred (Netzke) Bandemer in Morgan on June 11, 1933. As a child, he spent time in Nebraska and Nevada before moving back to Morgan where he graduated high school in 1952. In December 1952 he joined the Air Force where he served as a Flight Engineer on a B26 Bomber. He was also a Flight Engineer on a B25 Bomber after the Korean War ended. He was stationed at Moody Air Base in Valdosta, Georgia. He accumulated 1200 hours in air fly time. He was honorably discharged in December 1956. He came back to Morgan and began farming on his grandparent’s farm. On December 7, 1959 he married Alice Schuerkamp. They raised their children and farmed together up until her death in 1996. In addition to crop and hog farming, Douglas was passionate about hunting and fishing. He began hunting as a young boy and never missed an opener for the duck or deer season. His favorite outdoor place in the whole world was a duck slough. He taught his children and grandchildren how to hunt and gave them a big appreciation for the outdoors. Douglas was a conservationist, and worked with the MN DNR to develop public land for hunting and fishing along the Minnesota River Bottom near Hwy 4. He was an active member of Ducks Unlimited. For many years he raised and released pheasants, mallards, and Canadian geese. Douglas enjoyed numerous Twins, Viking and Gopher games. He especially loved to talk sports with Drake, his grandson in SD who shared his passion for sports. On September 12, 1997 Douglas married Rita Hornick at St. Mary’s Catholic Church in New Ulm. This relationship added a whole new dimension of love to his life with wonderful children, grandchildren and great grandchildren from Rita’s side of the family. Douglas is survived by his wife, Rita, children - Kay (Steve) Kalthoff of Lino Lakes, Gary (Tracy) Bandemer of Toronto, SD, Step-children – Douglas (Judy) Hornick of Buffalo, MN, Bryon (Linda) Hornick of New Ulm, Keith Hornick (Dave) from Rothschild, WI, Sherri (Jon) Helget from Wethersfield, CT, and Steven (Tierra) Hornick from New Ulm. Grandchildren – Karel (Jackson Jaro) Kalthoff from San Diego, CA, Kari (Mark) Comfort from Eagan, MN, Kasey (Collin Anderson) Kalthoff from Shoreview, Drake Bandemer from Brookings, SD, Mason Bandemer from Toronto, SD, and Jack Bandemer from Brookings, SD; step grandchildren – Shyranda Hornick from New Ulm, Shamara Hornick from New Ulm, Jeremy (Alyssa) Goldsmith from Sleepy Eye, Yuri (and friend Nick) Hornick from Sleepy Eye, Andrew Hornick, Northhome, MN, Jacob Hornick, Chelsea, MI and Conner Stahl from Wethersfield, CT; There are also 5 step great grandchildren. Douglas was preceded in death by his first wife Alice Bandemer, his first-born son Michael Bandemer in 1966, his father Walter Bandemer, his mother and step father Mildred and John Furry. Blessed be his memory.

The family of Douglas Bandemer created this Life Tributes page to make it easy to share your memories.

Douglas Emil Bandemer, 88 of Morgan, Minnesota passed away on...

Send flowers to the Bandemer family.