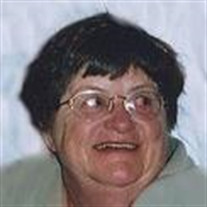 Dorothy Ruoho, 72, of Redwood Falls died Monday, April 25, 2011 at her daughter’s home in St. Paul. Funeral services will be held at 2 p.m. on Friday, April 29, 2011 from First United Methodist Church with Rev. Janiece Redman officiating. Burial will follow in the Redwood Falls Cemetery. Visitation will be held at the church for one hour prior to services. Arrangements are with Nelson-Martin Funeral Service of Redwood Falls. E-mail condolences may be sent via www.nelsonmartinfuneralservice.com. Dorothy Carrie Ruoho, the daughter of Rollie and Carrie Agnes (Willcox) Watkins, was born December 2, 1938 in Redwood Falls. She grew up in Redwood Falls and received her education here, graduating from Redwood Falls High School in 1956. Dorothy married Donald Ellstrom and they made their home in Redwood Falls. Following his death, she moved to St. Paul where she met and married Wayne Ruoho. Dorothy spent most of her adult life in St. Paul. She was employed at various factories in the St. Paul area, including Pedro’s Luggage and Univac, but Dorothy enjoyed the three years she worked at Jackpot Junction Casino most of all. Dorothy was a hard worker – she loved to garden and then can or freeze the corn and vegetables her gardens produced. She was thoughtful and kind – and spunky, as well. Dorothy loved her family and insisted on gathering for Christmas – snowstorm or not. She enjoyed trips with her sisters to Texas, Branson and Chicago. Dorothy is survived by her children Paul (Kelly) Ruoho of Stillwater, Jeffrey Ruoho of St. Paul, Laura Ruoho of St. Paul, and Wayne Ruoho of St. Paul; her grandchildren Andrew, Molly, Matthew, Nicholas, Michael, Daniel, Miranda, Dereck, Brittany, Sarah, Zachary, and Nakeyia; her great-grandchildren; Nevaeh, Blake, and Lila; her sisters Harriet Jensen and Lucille Nelson, both of Redwood Falls; her brother John Watkins of Montgomery, Alabama; and her twin brother Donald Watkins of Seaforth. She was preceded in death by her husbands Donald and Wayne; her daughter Lynn Ruoho; and her sister Ardith Jean Watkins. Blessed be her memory.

The family of Dorothy Carrie Ruoho created this Life Tributes page to make it easy to share your memories.

Send flowers to the Ruoho family.