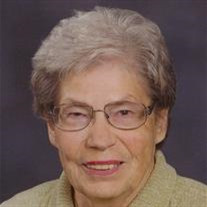 Dorothy L. Kalkhoff, 88, of Sleepy Eye and formerly of Morgan died Sunday, March 5, 2017 at Sleepy Eye Care Center. Mass of Christian Burial will be held at 10:30 a.m. on Wednesday, March 8, 2017 from St. Michael’s Catholic Church in Morgan with burial to follow in the church cemetery. Visitation will be held Tuesday, March 7, 2017, from 5 until 8 p.m., at Nelson-Hillestad Funeral Home in Morgan. Visitation will continue on Wednesday, from 9:30 until 10:30 a.m., at the church. Arrangements are with Nelson-Hillestad Funeral and Cremation Service of Morgan. E-mail condolences may be sent via www.nelson-hillestad.com. Dorothy L. Kalkhoff, the daughter of Herman and Cecilia (Reding) Koll, was born May 18, 1928 in Elrosa. The family moved to Morgan in 1930 and Dorothy received her formal education in country school, St. Michael’s Catholic School, and Morgan High School, graduating in 1946. On May 2, 1950, Dorothy married Ernest J. Kalkhoff at St. Michael’s Catholic Church and they farmed near Clements until moving to Olivia in 1957. In 1960 they moved back to Morgan where they farmed until retiring in 1990. Ernest died in 2001 and Dorothy continued to live on the farm until January 2010 when she moved to Countryside Retirement Community in Sleepy Eye. Due to failing health, Dorothy became a resident of the Sleepy Eye Care Center in January 2017. She was a member of St. Michael’s Catholic Church and its CCW, Gil-Mor Auxiliary, and Town and Country Club. Dorothy is survived by her children Kathleen (David) Sellner of Sleepy Eye, and Luvern (Marion) Kalkhoff of Morgan; grandchildren Patricia (Jason) Ericksen, Fay (Mark) Huselid, Sheila (Dan) Schmid, Alicia (Dylan) Lien, and Alison Kalkhoff; and great-grandchildren Emily Ericksen, Asha and Shelby Schmid, and Andi and Abby Huselid. Also surviving are her brothers Jerome and Leroy Koll; sisters Delores Rothmeier and Mary Lou Mathiowetz; sisters-in-law Hazel Koll, Joan Kalkhoff, Rita (Francis) Goblirsch, Bernice Senkyr, and Beatrice Serbus; and many nieces and nephews. She was preceded in death by her parents; husband Ernest; a son in infancy; brothers Leo, Ray, Ed, and Roman; sisters Loretta Heiderschiedt and Florence Weber; and several brothers- and sisters-in-law. Blessed be her memory.

The family of Dorothy L. Kalkhoff created this Life Tributes page to make it easy to share your memories.

Dorothy L. Kalkhoff, 88, of Sleepy Eye and formerly of Morgan...

Send flowers to the Kalkhoff family.