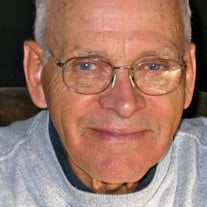 Donald Ziegenhagen, 87, of Morgan passed away peacefully at Sunrise Assisted Living in Minnetonka, surrounded by his loving daughters and family. A memorial service will be held at 10:30 a.m. on Monday, October 30, 2017 from the United Methodist Church in Morgan with inurnment to follow in St. John Lutheran Cemetery, Morgan. Visitation will be held on Monday, from 9:30 until 10:30 a.m., at the church. The family requests that memorial donations be made to the Arthritis Association of Minnesota. Arrangements are with Nelson-Hillestad Funeral and Cremation Service of Morgan. E-mail condolences may be sent via www.nelson-hillestad.com. Donald Eugene Ziegenhagen, the son of Christian A. Ziegenhagen and Isabell (Kragh) Ziegenhagen, was born July 12, 1930 in Redwood Falls. The family resided at the Kragh farm near Evan and then moved to the McKenzie farm in Brown County. He attended McKenzie Country School, Sleepy Eye and Morgan Public Schools. Donald graduated from Morgan High School in 1948. On January 18, 1953, Donald married Eileen Bruns at St. John Lutheran Church in Morgan. Shortly after their marriage they moved to Oklahoma for Donald to complete 16 weeks of basic training in the Army, followed by a year and a half at Fort Bliss in El Paso, Texas during the Korean War. Upon returning to Minnesota, the couple settled on the McKenzie (Ziegenhagen) farm in Brown County where they raised their family and resided for 50 years. Donald was extremely involved in his church, Morgan public schools and community. He held leadership rolls on the Morgan school board and St. John Lutheran Church and was an active member in the Morgan Lions Club. For 50 years Donald and his brother Doug farmed the family acreage. Their bond was a partnership that went beyond being brothers. Donald loved planning the next year and being out in the fields. Even though farming is a hard and stressful job, he seemed to thrive on it. Donald loved animals. He took great pride in training his dogs to do things like climb ladders and his cat to walk on a leash. His favorite hobby was fishing and he was happiest sitting in a boat, even if the fish weren’t biting. He gladly taught his wife and daughters the pleasure of being on the lake as well, and they spent many summers at their trailer on Lake Koronis enjoying that past time. Donald’s greatest pride and joy though was his wife, daughters and grandchildren. His eyes always lit up when he talked about his family. Donald is survived and dearly missed by his daughters Pamela (Alan) Shefland of Minnetonka, Kimberly Elowe (Chris Jenkins) of La Crescenta, California, and Jill (Mark) Benninghofen of Deephaven; grandchildren Erin, Danielle, Gabriel, Morgan, Reese Hayden, Owen, Emma and Oliver; siblings Doug (Sue) Ziegenhagen of Morgan, Lois (Leo) Fitzpatrick of Cottage Grove, and LaVonne (Lloyd) Menk of Mankato; many nieces, nephews and devoted friends; and his beloved cat, Tino. He is preceded in death by his wife Eileen; parents Christian and Isabell; and siblings James and Joan. Blessed be his memory.

Donald Ziegenhagen, 87, of Morgan passed away peacefully at Sunrise Assisted Living in Minnetonka, surrounded by his loving daughters and family. A memorial service will be held at 10:30 a.m. on Monday, October 30, 2017 from the United Methodist... View Obituary & Service Information

The family of Donald Ziegenhagen created this Life Tributes page to make it easy to share your memories.

Donald Ziegenhagen, 87, of Morgan passed away peacefully at Sunrise...

Send flowers to the Ziegenhagen family.