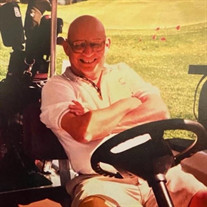 Don Richard Myers, 89, went home to heaven on Thursday, February 10, 2022. A memorial service was held February 19, 2022 at Calvary Lutheran Church in Chandler, AZ. Arrangements are with Nelson-Hillestad Funeral and Cremation Service of Redwood Falls. Condolences may be sent via www.nelson-hillestad.com. Don Richard Myers was born October 8, 1932 in Tracy, Minnesota to Glen and Irene (Snyder) Myers. Don attended Redwood Falls High School and then joined the Navy, serving in Korea. After the Navy, he attended Lee’s School of Barbering in St. Paul, Minnesota. In 1957, he started his career as a barber in Redwood Falls. He barbered with Perk Hassinger and eventually bought the business from him. Don won many awards for his flat tops and gained notoriety throughout the Midwest. When he wasn’t cutting hair, he spent many hours on the golf course. In 1961, he married Carol Jordan. Together they lived in Redwood Falls and had three daughters. He was active in St. John Lutheran Church. After moving to Arizona, he worked as a barber at a shop in Mesa and at the Ahwatukee Country Club. He also did odd jobs at the Ahwatukee Country Club, where he acquired the nickname “odd job.” He worked there for 27 years. He also worked at Ace Hardware, building screens. Don leaves behind his wife, of 61 years, Carol; and his children, Kim, Lisa, and Amy; three grandsons, R.J., Tanner, and Kaden; brother, Roy and sister, Joni; half brothers and sisters, Dennis, Patti, Laurie, and Wesley. In his loving memory.

The family of Don Richard Myers created this Life Tributes page to make it easy to share your memories.

Send flowers to the Myers family.