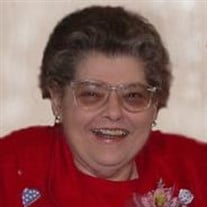 Devota Rothmeier, 72, of Morgan was called to her eternal home on Wednesday, June 1, 2011 from Rice Memorial Hospital in Willmar. Mass of Christian Burial will be held at 10:30 a.m. on Monday, June 6, 2011 from St. Joseph Oratory of Clements with Father Mark Mallak officiating. Burial will follow in the church cemetery. Visitation will be Sunday, June 5, 2011 from 4 until 8 p.m., with a prayer service at 7 p.m., all at Nelson-Martin Funeral Home in Morgan. Visitation will continue on Monday at the church for one hour prior to services. Arrangements are with Nelson-Martin Funeral Service of Redwood Falls. E-mail condolences may be sent via www.nelsonmartinfuneralservice.com. Devota Katherine Rothmeier was born to Benedict and Elsie (Rathmann) Kokesch on April 23, 1939 in New Ulm. She grew up on the family farm near St. George and graduated from Holy Trinity High School in New Ulm. On February 7, 1962, Devota married Richard Rothmeier at St. George Catholic Church in St. George. After their marriage the couple farmed near Clements in Redwood County for nearly 50 years. Devota was a member of St. Joseph’s Catholic Church in Clements where she belonged to the church choir, and co-founded the St. Joseph mission sewing group. She enjoyed quilting, sewing, crafts, gardening, playing cards, and polka dancing. Devota designed and made flowers for weddings. She was a 4-H leader, a member of the American Legion Auxiliary, the Eden Ladies, and the Harmony Homemakers. Devota enjoyed spending time with family and friends – and especially their grandchildren. She is survived by Richard, her husband of 49 years; and children Paul of Clements, Philip (Anita) of Madison Lake, Peter (Sue) of New Ulm, Mark (Linnae) of Clara City, Renee (Benjamin) Schroeder of Mankato, Bruce (Rachelle) of Goodyear, Arizona, and Anita (Tony) Mages of Morton. Also surviving are her grandchildren Justin, Jared and Jenessa; Amber, Brittany and Tyler; Kristina and Joseph; Priscilla, Jacob and Kyle; and Luke, Madilyn and Colton; and her brother Reuben (Kathy) Kokesch of Gibbon. She was preceded in death by her son Patrick, and her parents. Blessed be her memory.

Devota Rothmeier, 72, of Morgan was called to her eternal home on Wednesday, June 1, 2011 from Rice Memorial Hospital in Willmar. Mass of Christian Burial will be held at 10:30 a.m. on Monday, June 6, 2011 from St. Joseph Oratory of Clements... View Obituary & Service Information

The family of Devota Katherine Rothmeier created this Life Tributes page to make it easy to share your memories.

Devota Rothmeier, 72, of Morgan was called to her eternal home...

Send flowers to the Rothmeier family.