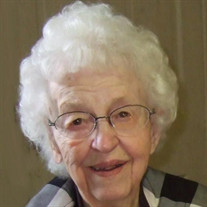 Delores Schroeder, 92, of Morgan died Monday, June 17, 2013 at Gil-Mor Manor in Morgan. Funeral services will be held at 1 p.m. on Saturday, June 22, 2013 from Zion Evangelical Lutheran Church in Morgan with burial to follow in the Redwood Falls Cemetery. Visitation will be held on Friday, June 21, 2013, from 5 until 7 p.m., at the church and will continue there on Saturday for one hour prior to services. Arrangements are with Nelson-Martin Funeral Service of Morgan. E-mail condolences may be sent via www.nelsonmartinfuneralservice.com. Delores Bertha Schroeder, the daughter of Albert and Martha (Keil) Mell, was born September 11, 1920 in Redwood County. She was baptized, confirmed, and married in St. John Lutheran Church in Redwood Falls. Delores married Alvin Kosel of Sanborn in 1944; he died in 1961. Delores lived in Redwood Falls until her marriage to Sylvan Schroeder in March 1962. At that time she moved to Sylvan’s farm in Eden Township, Brown County. She took on the daunting task of helping Sylvan raise his four daughters, Linda, Carol, Joyce and Donna. God bless her for that! Delores enjoyed gardening and had many flowers and plants at the farm. She loved her extensive doll collection. Delores learned to love the life on Sylvan’s farm. She was a wonderful cook and taught her new daughters how to bake, make pies and oatmeal raisin cookies for their dad, since they were his favorite. Her daughters also have many happy memories of shelling peas and snapping beans on the farm’s front steps. For many years, Delores was a volunteer at Minnesota Valley Lutheran School’s Treasure Haus in New Ulm. She enjoyed attending many of her grandchildren’s concerts, basketball games, and other activities. Delores continued to live on the farm with Sylvan until his death in 2010. At that time, she moved to Countryside Assisted Living in Sleepy Eye. In 2011 Delores moved into Gil-Mor Manor in Morgan where she was well-cared for by the staff. In the afternoon of June 17, 2013, Delores departed this earthly life, shortly after Pastor Hagen had a blessed devotion with her and daughter Donna. She is now at peace with Jesus. Delores is survived by her daughters Linda (David) Nielsen of Greenwood, Wisconsin, Carol (James) Wandersee of Baton Rouge, Louisiana, Joyce (William) Flock of Ghent, and Donna Schroeder of Bemidji. Also surviving are her grandchildren Michael Nielsen, Karen Nielsen Schantin, Elsa Nielsen, Timothy Nielsen, Daniel Wandersee, Christine Wandersee Lepkowski, Joseph Flock, Andrew Flock, Sarah Flock Leonard, Benjamin Flock, Katherine Flock, and Samuel Schroeder; and 11 great-grandchildren. She was preceded in death by her first husband, Alvin; her second husband, Sylvan; her parents, Albert and Martha Mell; and her brothers Wilbert and Donald Mell. Blessed be her memory.

Delores Schroeder, 92, of Morgan died Monday, June 17, 2013 at Gil-Mor Manor in Morgan. Funeral services will be held at 1 p.m. on Saturday, June 22, 2013 from Zion Evangelical Lutheran Church in Morgan with burial to follow in the Redwood Falls... View Obituary & Service Information

The family of Delores Bertha Schroeder created this Life Tributes page to make it easy to share your memories.

Send flowers to the Schroeder family.