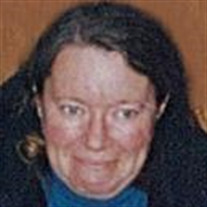 Darla McGowan, 56, of Franklin died Sunday, February 20, 2011 at the Redwood Area Hospital. Memorial Services will be held at 2 p.m. on Saturday, February 26, 2011 from St. Luke’s Lutheran Church in Franklin with Rev. Ed Glimpse officiating. A private inurnment will be held at a later date. Visitation will be held at the church on Saturday, February 26, 2011, from 12 noon until 2 p.m. Arrangements are with the Nelson-Martin Funeral Service of Redwood Falls. E-mail condolences may be sent via www.nelsonmartinfuneralservice.com. Darla Kay McGowan, the daughter of August and Ina (Ahrens) Beckendorf, was born February 28, 1954 in Redwood Falls. She grew up on the family farm in Flora Township, Renville County and received her formal education at Renville Public School. Darla was baptized and confirmed at the Flora Township Church. On September 12, 1970, Darla married Dennis “Butch” McGowan at the Morton Methodist Church. The couple spent their married life in the Morton and Franklin areas. Darla was employed by the Franklin Nursing Home and then Artesyn Technologies in Redwood Falls. When Artesyn downsized their workforce, Darla did babysitting for her grandchildren. She was a member of the Morton Saddle Club and the Birch Coulee Hunting Club. Darla enjoyed horses, bird watching, flower gardening, and spending time with her grandchildren. She is survived by her husband Dennis “Butch” McGowan, Sr. of Franklin; and her children Dennis (Amy) McGowan, Jr. of Franklin, and Bobby Jo (Mike) Ringeisen of Franklin. Also surviving are her grandchildren Michael, Tyler, Tiffany, Nicholas, Brandy, Hunter, and Hope; her brother Gary (Lois) Beckendorf of rural Renville; and many nieces and nephews. Darla was preceded in death by her parents August and Ina Beckendorf, and her step-mother Darlene Beckendorf. Blessed be her memory.

The family of Darla Kay McGowan created this Life Tributes page to make it easy to share your memories.