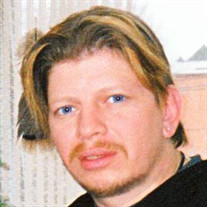 Dennis “Danny” DeLaTorre, 50, of Redwood Falls died Thursday, October 6, 2016 at his home. Funeral services will be held at 11 a.m. on Friday, October 14, 2016 from Cornerstone Christian Church in Redwood Falls with private burial at a later date. Visitation will be held at the church on Friday, from 10 until 11 a.m. Arrangements are with Nelson-Hillestad Funeral and Cremation Service of Redwood Falls. E-mail condolences may be sent via www.nelson-hillestad.com. Dennis “Danny” DeLaTorre, the son of Macaria “Nina” DeLaTorre and Dean Wesley Bell, was born September 18, 1966 in Huntington Park, California. He grew up in various cities in California. Danny was married to Velma Vigil; they had two sons, Dean and Justus. They moved to Morgan on May 22, 1994, and then relocated to Texas for a time. Around 2005, Danny moved to Redwood Falls where he has resided since. Danny worked as a cook most of his life. In his spare time, he enjoyed listening to rock music, playing his guitar, and fishing. Danny enjoyed the simple things in life – going for drives, throwing a football around, and hanging out with his kids and his friends. He was a member of Cornerstone Christian Church. Danny is survived by his sons Dean DeLaTorre and Justus DeLaTorre, both of Fairfax; father Dean Bell; mother Nina DeLaTorre; and girlfriend Barbara Sharp of Redwood Falls. Also surviving are his siblings Steve Alonzo, Susie Garcia, Maricela Bachelor, David Alonzo, and Tony Alonzo. Blessed be his memory.

The family of Danny DeLaTorre created this Life Tributes page to make it easy to share your memories.

Send flowers to the DeLaTorre family.