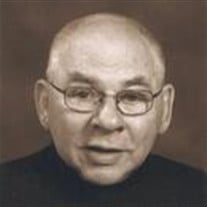 Daniel E. Dolezal, Sr., 78, of Morgan died Thursday, May 24, 2012 at Seasons in Redwood Falls. Mass of Christian Burial will be held at 10:30 a.m. on Saturday, May 26, 2012 from St. Michael’s Catholic Church in Morgan with burial to follow in the church cemetery. Visitation will be held on Friday, May 25, 2012, from 4 until 7:30 p.m., with a parish prayer service at 7 p.m., all at the Nelson-Martin Funeral Home in Morgan. Visitation will continue on Saturday at the church for one hour prior to services. Arrangements are with Nelson-Martin Funeral Service of Morgan. E-mail condolences may be sent via www.nelsonmartinfuneralservice.com. Daniel Eugene Dolezal, Sr., the son of Frank and Lucy (Serbus) Dolezal, was born January 4, 1934 in Hawick. He grew up in rural Danube and received his formal education in the local schools, graduating from Danube High School in1952. On June 23, 1956, Dan married Carol Schmitz at Seaforth and the couple made their home in rural Danube. In 1961, they moved to Minneapolis where Dan worked as a machinist at Unipress for 11 years. They moved to rural Morgan in 1969 and Dan drove truck for Central Bi-Products for 10 years. In 1979, Dan and Carol purchased the Morgan bowling alley and ran that business for the next five years. They moved into Morgan in 1991. Dan was a member of St. Michael’s Catholic Church and the Knights of Columbus. He enjoyed sports, spending time with his family, cooking, eating, and grilling. Dan is survived by his wife Carol of Morgan; children Monica (Robert) Sandmann of Morgan, Joy Draeger of Redwood Falls, Daniel (Marcia) Dolezal, Jr. of Morgan, Anthony (Sue) Dolezal of Redwood Falls, and Julie (Robert) Otto of Jacksonville, Florida. Also surviving are his grandchildren Justin (Nicki) Sandmann, Carly (Corey) Kleinschmidt, Ben Sandmann, Drew Draeger (girlfriend Jamie West), Hannah Draeger, Jared Dolezal, Jessica Dolezal (boyfriend Jordan Bottelberghe), Nolan Otto, Elanee Otto, Haley Dolezal, and Caitlin Dolezal; great-grandchildren Lauryn Menk, Reagyn Kleinschmidt, Dalton Kleinschmidt, Shawn Kleinschmidt, Nathan Kleinschmidt, Brynn Sandmann, Asher Sandmann, Austin Dolezal, and Brontè Bottelberghe. Additionally surviving are his siblings Claude (Marion) Dolezal of Edina, Lucy (John) Dotray of Minneapolis, Margie (Terry) Caye of Minneapolis, and Jenny Matteson of Bird Island; special companion Toby, the dog; and special friend Opi, the Cat. He was preceded in death by his parents; his brothers Frank, Jerome and Leonard Dolezal; his sister Darlene Dolezal; and special friend Sage, the dog. Blessed be his memory.

The family of Daniel Eugene Dolezal created this Life Tributes page to make it easy to share your memories.

Send flowers to the Dolezal family.