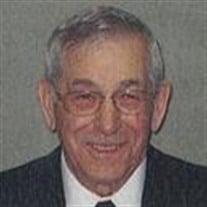 Dale Kopischke, 85, of Morgan died Wednesday, December 26, 2012 at Gil-Mor Manor in Morgan. Funeral services will be held at 10:30 a.m. on Monday, December 31, 2012 from St. John Lutheran Church in Morgan. Burial, with military honors, will follow at St. Michael’s Catholic Cemetery in Morgan. Visitation will be held on Sunday, December 30, 2012, from 4 until 7 p.m., at Nelson-Martin Funeral Home in Morgan, and will continue on Monday at St. John Lutheran Church for one hour prior to services. The family requests that memorials be directed to Morgan Memorial Foundation/Gil-Mor Manor. Arrangements are with Nelson-Martin Funeral Service of Morgan. E-mail condolences may be sent via www.nelsonmartinfuneralservice.com. Dale Alton Kopischke, the son of Emil and Elsa (Menk) Kopischke, was born June 22, 1927 in Morgan Township, Redwood County. He grew up on the family farm in Sherman Township. Dale received his formal education at Morgan schools, graduating from Morgan High School in 1945. Following graduation, Dale was inducted into the United States Army Air Corps. He served stateside, processing troops returning from the European, Asiatic and Pacific theaters. Following his honorable discharge, Dale returned to the Morgan area. On August 20, 1949, Dale married Viola Uhlenkamp in Morgan. In 1951, they moved to the farm in Sherman Township where they raised their family and farmed. The couple retired in 1994 and moved into Morgan. Dale was a member of St. John Lutheran Church in Morgan where he served on the church and cemetery boards. He belonged to the Morgan Lions Club and the Sherman-Bohn V.F.W. Post 5771 in Morgan. Dale was very active in the town baseball league, both as a player and a manager. He volunteered as the St. Michael’s basketball coach and was an adult 4-H leader for several years. Dale served as the Sherman Township Clerk for many years and was a member of the Mayflower Country Club. He is survived by his children Randy (Lu) Kopischke of Waukesha, Wisconsin, Rory (Jean) Kopischke of Comfrey, Roxane Koster of Round Lake, Robin (Roger) Otto of Chetek, Wisconsin, Ron (Judy) Kopischke of Fairmont, and Rod (Maggie) Kopischke of Overland Park, Kansas; 16 grandchildren; 13 great-grandchildren; and his brother LeRoy Kopischke of Baxter. Dale was preceded in death by his wife, Viola, on November 2, 2000; his son Ricky; his brother Jim Kopischke; his sister Darlis Nelson; his grandson Kyle Kopischke; and his son-in-law Steve Koster. Blessed be his memory.

The family of Dale Alton Kopischke created this Life Tributes page to make it easy to share your memories.

Send flowers to the Kopischke family.