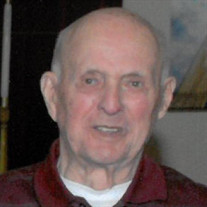 On Thursday morning, April 2, 2020, Curtis Richard Krueger, 84, passed away at River Valley Health and Rehabilitation Center in Redwood Falls, MN. He was born November 28, 1935 in Redwood Falls, MN to Walter and Anna (Radunz) Krueger. He was baptized March 15, 1936 and confirmed June 5, 1949 at St. John Ev. Lutheran Church, Redwood Falls, where he was a life-long active member. On July 31, 1960 he was united in marriage to Norma Jean Radel at Trinity Lutheran Church, Willow Lake Township, Sanborn, MN. They raised two children, son Terris and daughter, LeeAnn. After graduating from Redwood Falls High School, he went to Luther College, Decorah, IA for one year. Next, he joined the Navy. He traveled to Japan, Philippines, and Guam. Up until the end, he was proud of his time spent serving in the U.S. Navy. After being discharged from the Navy and getting married, Curt and Norma resided in Redwood Falls. Curt owned his own milk delivery service, worked at Morton Systems in Morton, MN, and finally up until his retirement worked for Schult Homes in Redwood Falls. Curt loved to hunt and fish, especially with his brothers. He was a Gophers and Vikings fan and took many bus trips to Twins games. Curt and Norma were very lucky to be able to go on several bus tours and saw many great parts of America, Canada, and Mexico. Curt was constantly tinkering with various wood working projects. He had a great love for music, especially German polkas. Curt and Norma celebrated their German heritages together with friends from all over, dancing, eating, and laughing at many polka fests. Curt had a great sense of humor which he passed down to his children and grandchildren. Curt was very proud of his grandchildren, whether it be their academic, athletic, or musical achievements. Curt loved the Lord by serving in the church from serving on church council, ushering, as well as weekly bible study. He took an avid interest in St. John Lutheran School enjoying their music programs and play performances. Curt is preceded in death by his parents, Walter and Anna, brothers Harold and Donald (Dan), and sister, Gladys. He is survived by his wife, Norma, son Terris, daughter LeeAnn Hance, son-in-law David Hance, and grandchildren Anna, Samuel, and Christopher Hance. He is also survived by sisters, Darlene and Virginia (Ginger) and brothers Walter Jr. (Wally), Allan, Myron (Mike), Duane, and Richard. A private service for immediate family at St. John Ev. Lutheran and burial will be April 6. A public memorial service will be announced at a later date. Rest eternal grant him, O Lord, and let light perpetual shine upon him. Services are with Nelson-Hillestad Funeral and Cremation Services of Redwood Falls. E-mail condolences may be sent via www.nelson-hillestad.com.

On Thursday morning, April 2, 2020, Curtis Richard Krueger, 84, passed away at River Valley Health and Rehabilitation Center in Redwood Falls, MN. He was born November 28, 1935 in Redwood Falls, MN to Walter and Anna (Radunz) Krueger. He was... View Obituary & Service Information

The family of Curtis R. Krueger created this Life Tributes page to make it easy to share your memories.

Send flowers to the Krueger family.