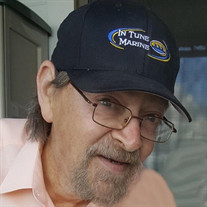 Clark Burdick, age 66, passed away on Friday, February 5th, 2021 at the Sleepy Eye Care Center, Sleepy Eye, Minnesota. Memorial services will be held at 6 p.m. on Friday, February 19, 2021 from Nelson-Hillestad Funeral Home in Redwood Falls, with burial to be held later this spring. Visitation will be held at the funeral home on Friday, February 19, 2021, from 4 until 6 p.m. Arrangements are with Nelson-Hillestad Funeral and Cremation Service of Redwood Falls. E-mail condolences may be sent via www.nelson-hillestad.com. Clark was born on July 7, 1954 to Marferd and Jean (Dallman) Burdick in Redwood Falls, MN. He grew up in the Redwood Falls area. Clark lived in Alexandria, MN while raising his family and later in Wisconsin Rapids, Wisconsin before returning to Minnesota in 2004. Clark worked for Perkins for over 30 years. He enjoyed the restaurant industry and serving people. Clark loved the outdoors, with fishing being his all-time favorite activity. When he lived in Alexandria, Clark was the go-to person on the fishing hot spots in the area. Clark was a loving and caring man, his family meant everything to him. Clark is survived by his children Stephanie (Joseph) Coomer of Atlanta, GA, Daniel Burdick of Atlanta, GA, and his four grandchildren Gray, Ryan, Evelyn, and Lucy. Clark is survived by his siblings Clyde (Debra) Burdick of St. Cloud, Diana (Brian) Batzlaff of Belgrade, Laurie (Kevin) Zieske of Morgan, Kimberly (William) Lund of Morgan, and Susan (Paul) Swoboda of Redwood Falls. He was preceded in death by his parents, Marferd and Jean, and by his brother and sister-in-law Ronald (Vicky) Burdick. Blessed be his memory.

The family of Clark R. Burdick created this Life Tributes page to make it easy to share your memories.

Send flowers to the Burdick family.