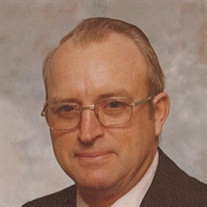 Clarence R. Jacobson, 89, of Redwood Falls died Wednesday, August 10, 2011 at Golden Living Center in Olivia. Funeral services will be held at 2 p.m. on Friday, August 12, 2011 from Gloria Dei Lutheran Church in Redwood Falls with Rev. Bill Klavetter officiating. Burial will follow in the Redwood Falls Cemetery. Visitation will be held Thursday, August 11, 2011, from 4 until 8 p.m., at the Nelson-Martin Funeral Home in Redwood Falls and will continue at the church on Friday for one hour prior to services. Arrangements are with Nelson-Martin Funeral Service of Redwood Falls. E-mail condolences may be sent via www.nelsonmartinfuneralservice.com. Clarence Ruben Jacobson, the son of John and Margit (Gullickson) Jacobson, was born June 21, 1922 in Paxton Township, Redwood County, Minnesota. He grew up on the family farm in Paxton Township and received his formal education at the nearby country school. Following school, Clarence worked on the home farm. On April 2, 1944, Clarence married Ruth Tordsen at the First English Lutheran Church in Redwood Falls. In 1948, the couple moved to a farm in Paxton Township where they have lived ever since. Clarence was a self-employed farmer his entire working life. He was a member of Gloria Dei Lutheran Church and was a past member of the church council. Clarence also served as a board member of Redwood County District School #1764. His wife, children and grandchildren were of most importance to him; he also enjoyed elk hunting, participating in tractor pulls, and having and riding horses. Clarence liked to travel, see new places and visit with people. He also had a sweet tooth – particularly for candy. Clarence liked to spend time playing cards. He is survived by his wife of 67 years, Ruth Jacobson of Redwood Falls; his children Lloyd (Liz) Jacobson of Redwood Falls, Janette (David) Gronseth of St. Augusta, and Jeanne (Brad) Limoges of Redwood Falls; and his daughter-in-law Dorothy of Owatonna. Also surviving are his grandchildren Eric (Mariette) Jacobson, John (Cheri) Jacobson, Jamie Jacobson (fiancé Tim), Jessica (Lonnie) Kodet, Shawn (Maggie) Kohout, Kim (Matt) Kiergaard, Brian (Samantha) Kohout, Hilary (Tony) Evans, and Tyler Limoges; 16 great-grandchildren; his brother Elmer (Pat) Jacobson of Redwood Falls; and his sisters Gladys (Ervey) Shelley of Cambridge, and Norma Brothers of Minneapolis. He was preceded in death by his son Kenneth, a daughter in infancy, his brothers Harold and John, and his sister Margaret. Blessed be his memory.

The family of Clarence Ruben Jacobson created this Life Tributes page to make it easy to share your memories.

Send flowers to the Jacobson family.