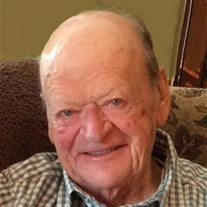 Carl Grabow, 80, of rural Morgan died Monday, December 1, 2014 at his home. Funeral services will be held at 10:30 a.m. on Friday, December 5, 2014 from Zion Evangelical Lutheran Church in Morgan. Burial, with military honors, will follow at Eden Methodist Cemetery, rural Morgan. Visitation will be held at the church on Thursday, December 4, 2014, from 5 until 8 p.m., and will continue on Friday, from 9:30 until 10:30 a.m. Arrangements are with Nelson-Martin Funeral Service of Morgan. E-mail condolences may be sent via www.nelsonmartinfuneralservice.com. Carl Donovan Grabow, the son of Henry and Agnes (Hasse) Grabow, was born January 14, 1934 on the family farm in Eden Township, Brown County. He lived on this farm his entire life. Carl received his elementary education in Eden Township Country School and graduated from Morgan High School in 1952. He enlisted in the United States Air Force on January 6, 1955 and served with the secret service until his honorable discharge on November 5, 1958. On May 3, 1959, Carl married Shirley Mae Dummer at Bethlehem Lutheran Church in Clements and they made their home on the Grabow family farm. Carl farmed until 1968 and then was employed as a line manager at Zytec Corporation until his retirement in 1995. He was an active member of Zion Evangelical Lutheran Church in Morgan where he served as church president, Sunday school teacher and on various committees. Carl taught gun training through the Sportsmen’s Club for many years and received the Sportsman of the Year award in 1986. He also served as an assessor for Brown County. Carl is survived by his wife Shirley of Morgan; children Jodee (Steve) Okins of Willmar, Suszette (Laurie) Hoffbeck of Morgan, Shaun (Nancy) Grabow of Gaylord, and Joshua (Christine) Grabow of Oronoco; 11 grandchildren; two great-grandchildren; and his sister Joycelyn Callahan of Grand Rapids. He was preceded in death by his parents. Blessed be his memory.

Carl Grabow, 80, of rural Morgan died Monday, December 1, 2014 at his home. Funeral services will be held at 10:30 a.m. on Friday, December 5, 2014 from Zion Evangelical Lutheran Church in Morgan. Burial, with military honors, will follow at... View Obituary & Service Information

The family of Carl Donovan Grabow created this Life Tributes page to make it easy to share your memories.

Send flowers to the Grabow family.