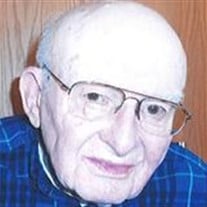 Calvin Stronach, 93, of Redwood Falls died Monday, January 16, 2017 at Sunwood Good Samaritan Care Center. Funeral services will be held 11 a.m. on Thursday, January 19, 2017 from First United Methodist Church in Redwood Falls. Burial, with military honors, will follow in the Redwood Falls Cemetery. Visitation will be held Thursday, from 10 until 11 a.m., at the church. Arrangements are with Nelson-Hillestad Funeral and Cremation Service of Redwood Falls. E-mail condolences may be sent via www.nelson-hillestad.com. Calvin Neale Stronach, the son of Francis McLennan Stronach and Martha (Schumacher) Stronach, was born October 15, 1923 on the family farm in Delhi Township, Redwood County. He spent his youngest years on the farm and received his first two years of formal education in the Delhi Public School. In 1930, the Stronach farm home was destroyed by a fire which resulted in the death of Cal’s older brothers, their mother, and uncle. Cal’s father died two years later, after which Cal, his sister Marjorie, and their step-mother moved into Delhi and then soon after into Redwood Falls. Cal finished his formal education in Redwood Falls Public School, graduating high school in 1943. He was inducted into the United States Army and served in the infantry during the Korean War. Following his honorable discharge, Cal returned to Redwood Falls. He walked thousands of miles as the meter reader for A.C. Burmeister and later the Redwood Falls municipal power company. In his spare time, Cal enjoyed hiking, singing and gardening. He did a lot of traveling with the Prime Timers throughout the United States, Europe and Japan. Cal was a member of the First United Methodist Church where he sang in the choir and occasionally served as an usher. He is survived by his sister Marjorie Auld of Minneapolis, and one cousin. Cal was preceded in death by his parents, brothers George and Gordon, and step-mother. Blessed be his memory.

The family of Calvin Stronach created this Life Tributes page to make it easy to share your memories.

Send flowers to the Stronach family.